Brookfield Infrastructure Partners LP (BIP) is a global company, based in Bermuda, with utilities, transport, energy, and data infrastructure businesses in North and South America, Europe, and the Asia Pacific.

The Utilities segment is BIP’s biggest segment for Adjusted EBITDA and Funds From Operations – FFO, at 34% in Q1-2 2020, closely followed by Transport, at 29% of EBITDA and 28% of FFO. The Energy segment contributed ~27% in both categories so far in 2020.

BIP’s newest segment, Data Centers, also is its smallest, contributing just ~10% in FFO and EBITDA, but it’s the fastest growing one – EBITDA jumped 45% and FFO rose 46.5% in Q1-2 2020. As you may have heard, data centers have benefited from the work at home environment, and continue to ride the wave of the digitalization of society. 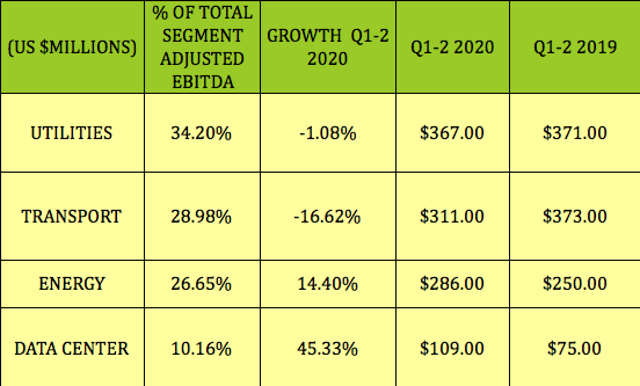 The Transport segment was the most challenged in Q1-2 2020, dropping over -16% in FFO and EBITDA, but that was partially due to discontinued operations.

It had “higher volumes across our Australian and Brazilian rail networks, as well as the contribution from our recently acquired North American rail operation. These positive factors were more than offset by the loss of earnings associated with the sale of a European port business and the partial sale of our interest in our Chilean toll road operation. Results were also affected by a weaker Brazilian real and lower volumes following government-imposed lockdowns, which together reduced results by $29 million.” (BIP site) 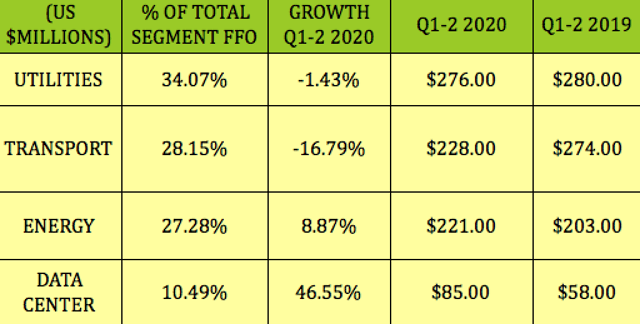 Overall, revenue is up 26% so far in 2020, while EBITDA and FFO are roughly flat. Net income is down ~-55%, due to “fair value adjustments related to our corporate hedging program which totaled nearly $90 million for the quarter compared to gains of approximately $35 million in the same period of 2019. This led to a net loss for the three-month period ended June 30, 2020 of $61 million compared to net income of $98 million in the prior year.” (BIP site) 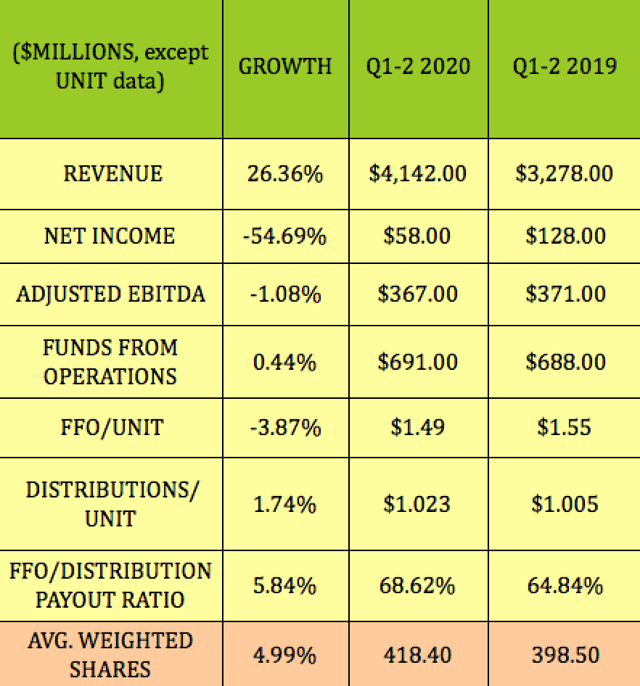 “From an economic and accounting perspective, the transaction was analogous to a unit split as the transaction did not result in any underlying change to aggregate cash flows or net asset value except for the adjustment for the number of units/shares outstanding. Each unitholder of record on March 20, 2020, received one (1) class A exchangeable subordinate voting share of BIPC for every 9 BIP units held, or approximately 0.11 Shares for each BIP unit. BIP unitholders now own approximately 32,800,000 Shares, or 70.4% of BIPC’s issued and outstanding Shares, with Brookfield Asset Management Inc. and its affiliates holding 29.6% of the remaining Shares. The Shares have commenced regular-way trading on the Toronto Stock Exchange and the New York Stock Exchange under the symbol BIPC.” (Source: BIP site)

BIPC’s earnings are a subset of BIP’s. On March 30, 2020, BIP contributed its regulated utilities businesses in Brazil and the U.K. to BIPC.

BIP breaks down the amount of capital deployed for each segment every quarter, with the balance remaining to be commissioned. For now, management appears to be concentrating more on the Utilities and Data Center segments, in terms of percentages in excess of their respective FFO/EBITDA contributions.

Although it contributes ~34% of FFO and EBITDA, the Utilities segment currently accounts for 44% of BIP’s Capex balances. 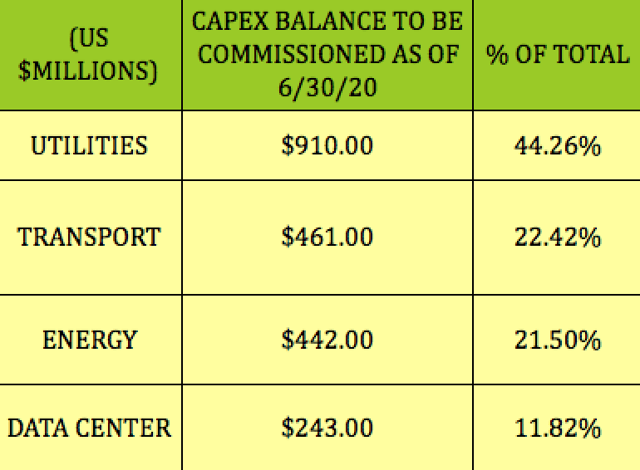 Like many other companies, BIP’s ROA and ROE suffered from much lower net income in Q1-2 2020. Its debt/equity is higher than utilities industry averages, while its net debt/EBITDA of 10.67X was lower than its ~12X leverage as of 12/31/19.

BIP’s debt ladder shows modest amounts, 7%/year, of total debt due in 2020 and 2021, which should give management plenty of time to refinance its larger maturities due from 2022 onward: 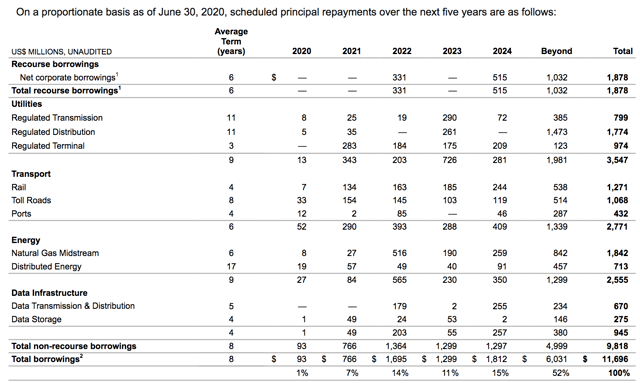 With its mix of assets, BIP isn’t a straightforward match to any specific industry. We went with utilities comps, since that’s BIP’s biggest segment.

Since our last article on the BIP group of dividend stocks, the new entity, BIPC, has attracted the most interest from investors over the past three months, rising 17.37%.

BIPC, BIP, and BIP.PR.D shares have all outperformed the Utilities Select Sector SPDR Fund, but only BIPC has kept pace with the S&P 500, which is up 17.58% in this period. 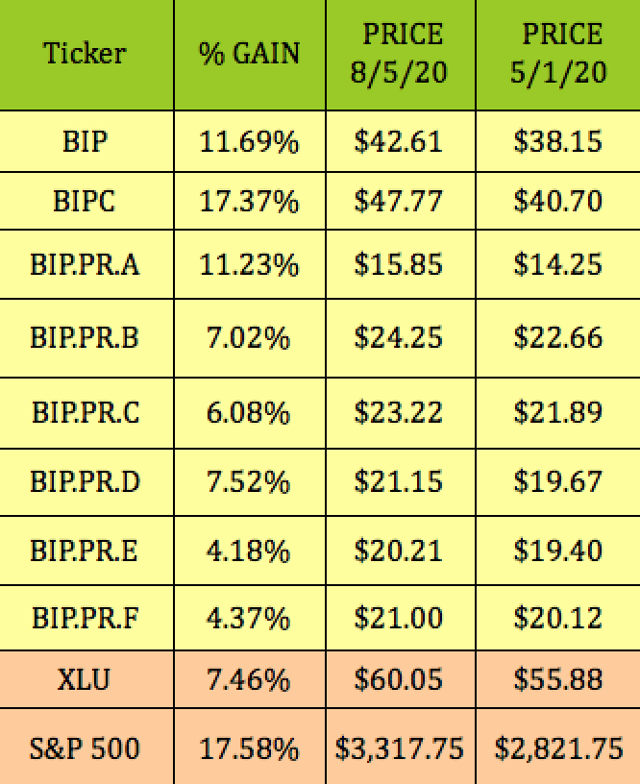 BIP has six preferred series, which all have a rate reset feature every five years, which is a specific amount, plus whatever the five-year Canadian bond rate is at that time, OR a total ceiling rate. 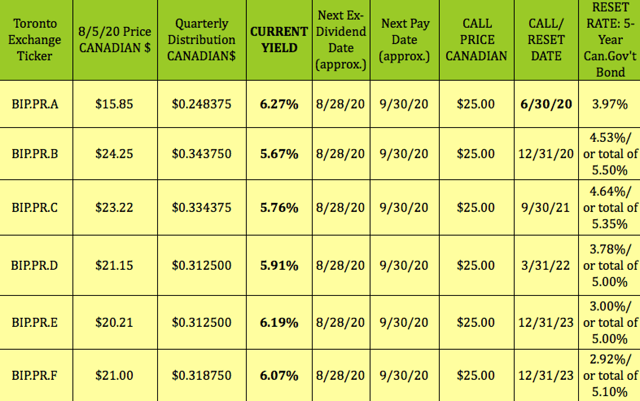 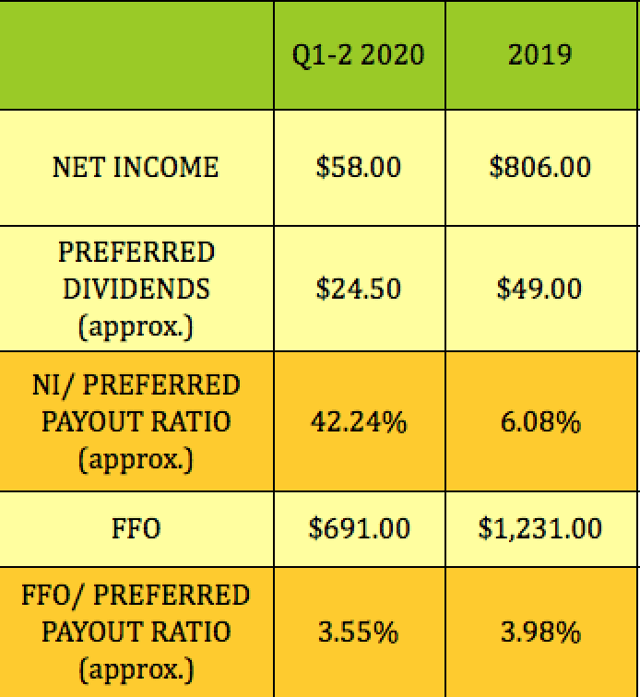 NOTE: Put sellers don’t receive dividends. We use annualized yields in our tables so subscribers can compare trades of different lengths.You can see more details for these 2 trades on our Covered Calls Table and our Cash Secured Puts Table.

All tables furnished by DoubleDividendStocks.com, unless otherwise noted.

We scour the US and world markets to find solid income opportunities with dividend yields ranging from 5% to 10%-plus, backed by strong earnings.

We publish exclusive articles each week with investing ideas for the HDS+ site that you won’t see anywhere else.

We offer a range of income vehicles, many of which are selling below their buyout and redemption values.

Disclosure: I am/we are long BIP. I wrote this article myself, and it expresses my own opinions. I am not receiving compensation for it (other than from Seeking Alpha). I have no business relationship with any company whose stock is mentioned in this article.

Additional disclosure: Our DoubleDividendStocks.com service has featured options selling for dividend stocks since 2009.
It’s a separate service from our Seeking Alpha Hidden Dividend Stocks Plus service.

Disclaimer: This article was written for informational purposes only, and is not intended as personal investment advice. Please practice due diligence before investing in any investment vehicle mentioned in this article.

ArcelorMittal Outperforms On Costs As The Industry Deals With Absent Demand

Bitcoin Price Continues Rally, Positive Sentiment Is Off the Charts

FA Center: Here are your odds the stock market will be higher on Dec. 31

Kirby Is A Buy