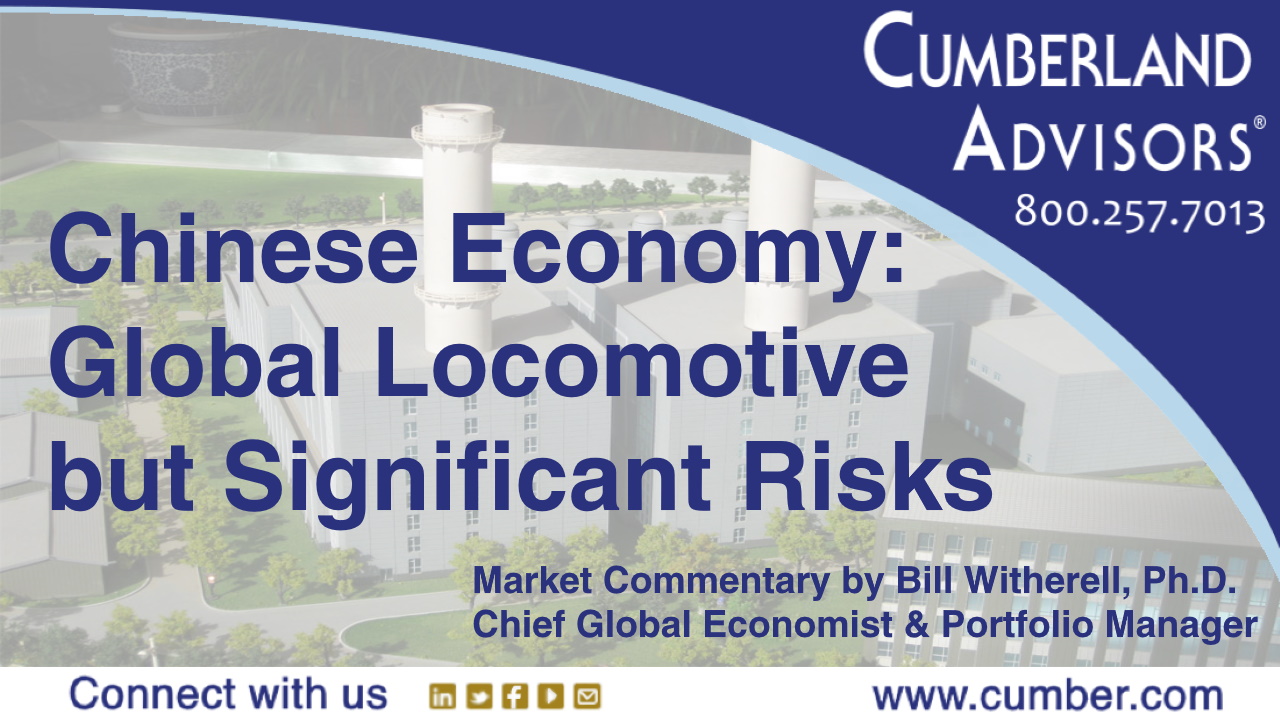 China’s economy, the second largest in the world after that of the United States, is recovering from a sharp slowdown in the first quarter of the year. The first estimate of the annualized second-quarter GDP growth rate is +3.2% versus 2.4% expected, a strong reversal from -6.8% in the first quarter. The advance indicates that China’s early success in combating the coronavirus, along with positive results from China’s policy stimulus measures, have reversed the drag on the economy.

Early in the year, government spending was increased substantially, in part because of massive public health material and equipment needs. There were also VAT and income tax reductions, accelerated disbursement of unemployment insurance payments, waived social security contributions, and increased public investments. In sum, discretionary fiscal measures equal to 4.1% of GDP were provided in the first half. Looking ahead, significant further infrastructure spending is likely.

On the side of monetary policy, large liquidity injections early in the year were followed by liquidity support measures where needed. The reserve requirement ratio was lowered, as were the interest rate paid on excessive reserves and various policy rates. There were also measures to encourage lending to smaller firms and steps to limit tightening of financial conditions. As a result, credit growth has been robust and will provide a tailwind to industry, construction, and commodity markets in the second half.

Most other recent economic readings are encouraging. China’s Caixin Manufacturing PMI (purchasing managers index) for June reached a six-month high, while the Caixin Services PMI for June indicated that service sector activity (52% of the economy) expanded at the fastest rate for over a decade, as did the Composite Output Index (manufacturing plus services). Industrial production rose 4.8% versus one year ago. All categories of investment improved in June. The unemployment rate improved slightly – 5.7% in June versus 5.9% in May.

On the negative side, while work resumption rates have continued to rise, businesses remain cautious about increasing hiring, despite their optimism about the economic outlook. Also, retail sales in June were down 1.8% compared with a year ago, but that’s an improvement over the -2.8% figure for May. The mid-June flare-up of the pandemic in some parts of China, leading to virus control measures in Beijing, and the continued weak employment situation probably were factors moderating household consumption.

New export business is expanding for the first time in five months. Imports also grew in June, advancing at a 2.7% pace compared to a year ago, bouncing back from a 16.7% decline in May. Imports from the US increased by 11.3%, driven by agricultural goods purchased in accordance with the “phase one” trade deal. Import demand by an expanding Chinese economy is likely to be a tailwind for the global economy in the second half of 2020 and in 2021.

Looking forward, there is higher than usual uncertainty about the future course of the global economy, including the outlook for the Chinese economy. For example, it is evident that China’s economic growth for the current year will be down sharply from last year’s 6.1% advance. But how far down? The OECD is projecting a negative annual growth for China’s GDP for the year 2020 of 2.6% or, if there is a significant second wave of the pandemic, -3.7%. In contrast, the IMF is projecting growth of +1% for 2020. In view of the latest data, we suggest that a significantly stronger second half could result in a full-year reading of 2-3%. Next year, China’s economy may return to a 6.5-7.0% pace, but the downside risks to such a positive outlook should be considered.

Perhaps the greatest uncertainty about the outlook for China’s economy is the future course of the global pandemic. When will the virus that continues to surge in the country with the globe’s largest economy, the United States, be brought under control and at what cost in terms of partial and total shutdowns? Will there be a significant second wave affecting China and economies around the globe? When will an effective vaccine be developed and become widely available? What will be the longer-term structural changes in the Chinese and other economies resulting from the pandemic and its economic effects? We don’t have answers to these questions.

Another important cause of uncertainty in the outlook is the deterioration in relations between China and the US, and between China and China’s other trading partners. The increasing rivalry between China and the US in the areas of trade, technology, security matters, and geopolitics will continue whatever the outcome of the US election in November. But the election outcome would likely lead to differences in how the US approaches these issues – unilateral bluster, insults, threats and the levying of tariffs and sanctions, sometimes with no coherent strategy, versus an effort to lead a multilateral approach together with our allies and using, where feasible, existing international agreements and institutions. Implementation of the “phase one” trade deal appears to be proceeding, with some catch-up in trade flows being necessary due to COVID-19 interruptions. Further serious US-China trade negotiations are unlikely before the November US elections.

There is certainly more work needed on US-China trade issues. We note, however, that there are real limits to any “decoupling” of the US and Chinese economies. Pursuit of protectionist actions directed at decoupling would likely be costly to both economies. The integral role that China plays in global trade is obvious. Less well appreciated is the extent of China’s foreign direct investment connections with the global economy. In fact, China leads the world in the number of countries with which it is connected through inward direct investments. And US, European, and Japanese firms have many investments in China, as do firms of emerging-market economies. While the epidemic is likely to result in some reshoring of strategic goods production, China will continue to play an important role in global supply lines.

The US-China technology rivalry is too complex a subject to cover in this note. We just observe that the US appears to be far behind China in a number of important areas of technology, many dependent on the rollout of 5G and the development of artificial intelligence applications, including innovations for financial and banking systems (e.g. digital wallets and a messaging system to complement the SWIFT payment network). China’s technology lead will continue, despite measures directed at the leading 5G firm, Huawei, and will be an important positive factor for the Chinese economy and its equity market.

Chinese stocks have outperformed, indeed soared, as the pandemic eased there, lockdowns ended, and the economy clearly began to recover. Chinese authorities encouraged the boom in the domestic equity markets, clearly welcoming the positive political value of a strong market. Last week, however, there evidently were concerns that the market had risen too fast and become “frothy.” Statements to this effect and indications that several government-controlled funds would be taking some profits were enough to cause a market correction of about 6%. After this correction, the broad-based iShares MSCI China ETF (NASDAQ:MCHI) is up 11% year-to-date July 17. The Investco China Technology ETF (NYSEARCA:CQQQ) is up 28.6% year-to-date, and the KraneShares CSI China Internet ETF (NYSEARCA:KWEB) is up 34.3%. In comparison, the year-to-date return for the iShares MSCI ACWI ex-US ETF (NASDAQ:ACWX) (all-country except the US) is down 7.6%. We are maintaining a China overweight position in our International and Global ETF portfolios.

Cumberland Advisors has holdings of the MCHI and ACWX ETFs in its investment portfolios. The author of this note has ACWX in his personal portfolio.

Bitcoin Surges to $9.3K for First Time in a Week — Is it a Fakeout?

Crestwood Equity Partners: The Distribution Could Go Either Way When Results Land

Where Is This Market Headed Next