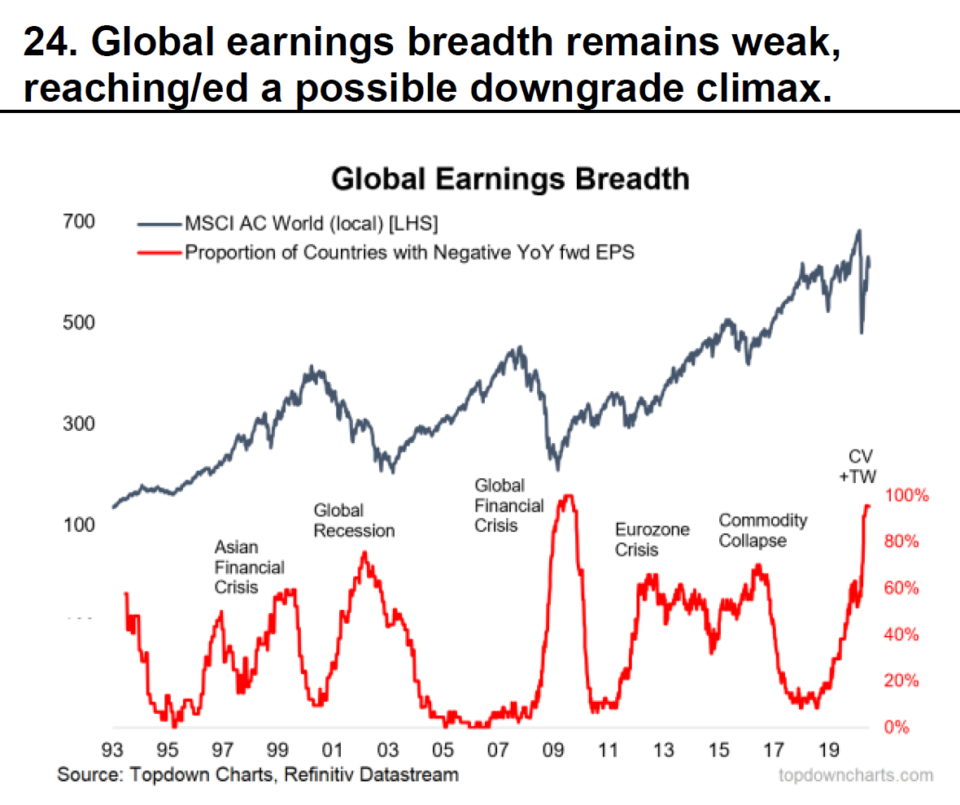 What a whirlwind first half of 2020 it was. A 35% drop in a few weeks, only to see one of the biggest and broadest rallies ever from late March through June. Ironically, stocks finished not far from unchanged during the first half of the year. If you emerged from under a rock this week, you’d think not a whole lot has changed – aside from all of these people wearing masks everywhere.

And now we can catch our bearings and look ahead. Earnings season is right around the corner, and COVID-19’s toll will be clearly seen starting this go-around. The next 4 quarters will likely feature some terrible top and bottom line numbers due to the global economic shutdowns that took place during the first half of 2020.

Price action during February and March reflected the dramatic GDP decline that was to come. In just 23 trading days, the US stock market fell 35%, foreign developed markets dropped 34%, emerging markets were down 31% and non-US small caps declined 38%. Since the February highs, these markets are still off slightly, but much of the losses have been recovered.

Couple the vast earnings decline with a snapback in equity prices and we have very high forward P/E ratios. The bears can understandably point to a chart of the S&P 500’s forward P/E being very elevated relative to history. And they have a point. US equity valuations are quite high on most measures. Global stocks likely offer better valuations, but the fire-sale deals available during mid-March are gone.

That brings us to this edition of the Chart of the Week. We have a list of our favorite global equity breadth indicators here. Today, I’m looking at the proportion of countries with negative year-over-year forward EPS. As you’d expect, this chart explodes higher around bear markets and recessions. Forward earnings are, of course, always estimates from analysts. The red line uses Thomson Reuters IBES data. In gray above is the MSCI ACWI. Notice, the red line is near the 100% level – meaning just about all of the countries we can track are expected to report some kind of earnings decline in the coming year. Meanwhile, stock prices are not far from all-time highs. Should we expect that? History can be a guide.

Unfortunately, the only other time almost all countries experienced a year-on-year decline in forward earnings was during the Global Financial Crisis (well, maybe that’s a good thing). Price action on ACWI bottomed in advance of the peak in failing earnings – as is often the case, price leads fundamentals. The market cycle is ahead of the business cycle. Naturally, the red line will be a contrarian indicator most of the time.

Notice a few other occurrences of forward EPS estimates dropping – around the Asian contagion of 1998, 2000 tech bubble, 2011’s eurozone crisis and, finally, the 2014-2015 commodity collapse. Just the 2000 recession witnessed prices continue to drift lower after analysts had reduced their earnings forecasts.

1998, 2011 and 2014-2015 all featured equity prices snapping back in advance of the forward earnings downgrades. 2020 is different though. The relief rally has been incredibly sharp in the face of an equally incredibly grim earnings picture. No area of the world was left unscathed. Economists expect global GDP to drop about 5% for 2020 – far greater than 2008’s GDP loss. 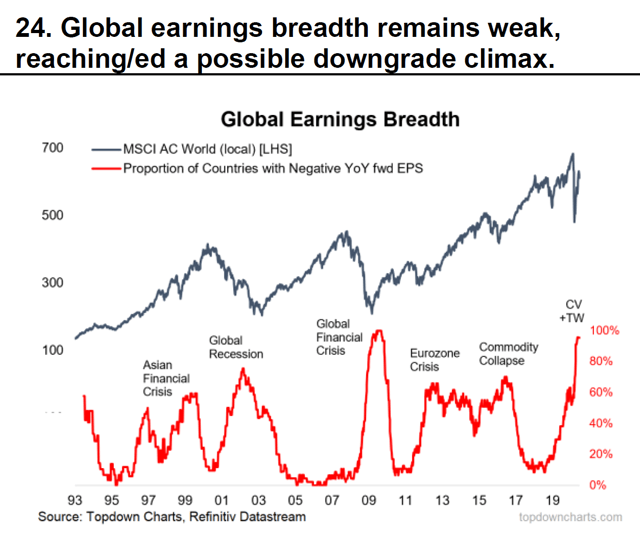 The bright side could be that we may have reached a peak in analysts’ negative revisions to earnings. But who knows – the next couple quarters of earnings data will cast much more light on how firms were able to cope with the worst economic environment since the Great Depression. Check out our Quarterly Strategy Pack for a discussion of the outlook across global macro and markets.

Here’s the point: History suggests forward EPS losses precede equity market declines, but 2020’s stock market rally from the March 23 lows has been enormous, while companies from nearly all of the nations we can track will have lower earnings in the coming year. Equities have a lot to live up to now as we proceed into the second half of 2020.

Kirby Is A Buy

COVID-19 Recession: No Sign Of A Recovery – The iM-Weekly Unemployment Monitor Update 8/20/2020