Even though Holly Energy Partners (NYSE:HEP) reduced their distributions by 48% earlier in 2020, they still currently offer a very high yield slightly above 10%. Given the desirability of this potential income in a low interest rate world, it poses two important questions, being whether their distribution is now safe, and if safe, can they reinstate their previous distributions thereby providing a yield on cost of approximately 20%.

Since many readers are likely short on time, the table below provides a very brief executive summary and ratings for the primary criteria that were assessed. The following sections all provide further detailed analysis for those readers who are wishing to dig deeper into their situation. 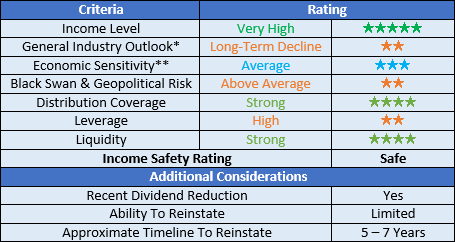 *There are significant short- and medium-term uncertainties for the broader oil and gas industry; however, in the long term, they will certainly face a decline as the world moves away from fossil fuels.

**Whilst the oil and gas industry to which they service has high economic sensitivity, given the more stable nature of the midstream sub-industry, this was deemed to be average.

Recently I have taken actions to make my analysis more comparable between different companies and partnerships by introducing a more standardized rating system. A list of all my equivalent ratings as well as more information regarding my rating system can be found in the following Google Document. Whilst the list is only small at the moment, please check back across time since it will continue growing in tandem as my coverage continues growing. 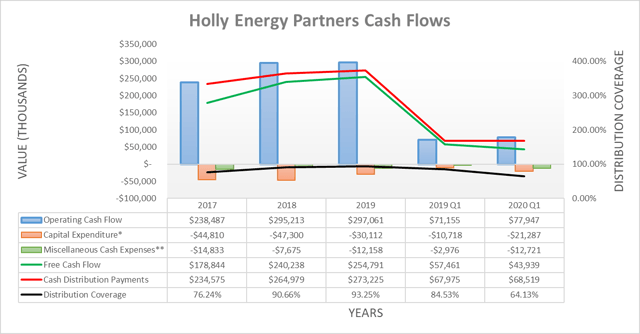 Instead of simply assessing distribution coverage through distributable cash flow, I prefer to utilize free cash flow since it provides the toughest criteria and best captures the true impact to their financial position. The main difference between the two is that the former ignores the capital expenditure that relates to growth projects, which given the very high capital intensity of their industry can create a material difference.

Throughout 2017-2019 their distribution coverage was better than many partnerships at an average of 86.72%. Since this was below 100%, it was unfortunately still not sufficient to provide adequate coverage and thus a portion of their distribution payments have been debt-funded. Whilst this sets a negative precedence and left them vulnerable heading into this economic downturn, their prospects going forward are more important.

Since reducing their quarterly distributions to $0.35 per unit, they now cost $148m per annum, based upon their latest outstanding unit count of 105,440,201. When this is combined with their guidance for 2020 capital expenditure of $64m at the midpoint, see the graph included below, this means that they require operating cash flow of $212m to remain cash flow neutral and thus provide the barest minimum level of adequate distribution coverage. 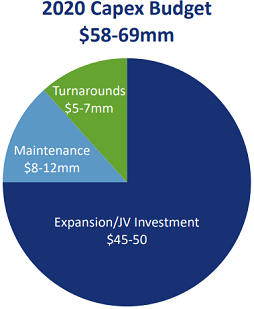 Considering their operating cash flow has been steadily growing from $238m in 2017 to $297m in 2019, they should have zero issues generating $212m during 2020 and the foreseeable future. If their operating cash flow during 2020 was equal to 2019, then their free cash flow would be $233m and thus give them strong distribution coverage of 157.43%. This provides the all-important margin of safety that helps to account for their miscellaneous cash expenses that outrank distribution payments; see those listed beneath the first graph included above.

It was interesting to observe that they have not reduced their capital expenditure like so many of their peers, with their guidance for 2020 capital expenditure of $64m at the midpoint representing a 56.09% increase compared to the average of 2017-2019. Ideally, this should lead to higher growth than their average peer group and thus further support their ability to reinstate their previous distributions; however, unitholders would be wise to keep their expectations tempered given the general economic uncertainties at the moment. 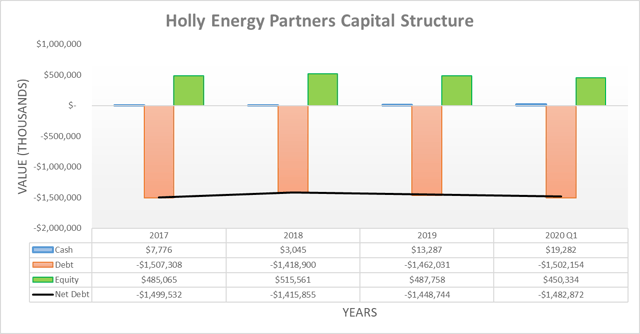 Throughout the last three and half years, there have been no material changes to their capital structure with their net debt remaining broadly unchanged, which sits far higher than their equity. The extent that this impacts the safety of their distributions and general investment risks will depend upon their leverage and liquidity. 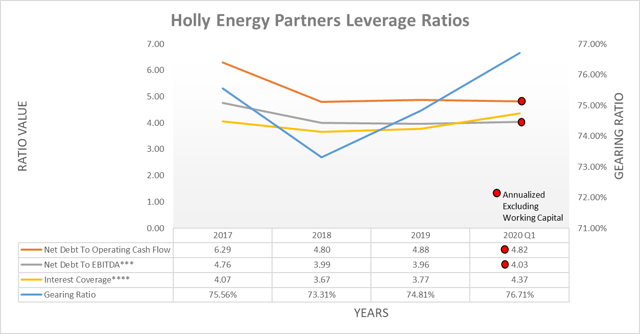 After reviewing these financial metrics, it can be seen that they have high leverage, as primarily evidenced by their net debt-to-EBITDA of 4.03 and interest coverage of only 4.37. Although these are towards the lower end of the high territory, as deemed by a net debt-to-EBITDA between 3.51 and 5.00. Whilst their gearing ratio is at a very high level at 76.71%, it should be remembered that their leverage relative to their earnings is more important than relative to their equity.

Whilst high leverage is certainly not ideal, it does not pose a threat to their ability to remain a going concern since earnings should be fairly stable. It does further indicate that their ability to reinstate the previous distributions is limited at best and definitely requires either higher earnings or lower capital expenditure. 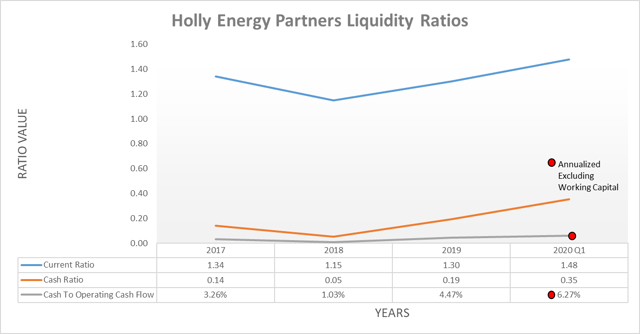 Their financial strength is supported by their strong liquidity, which mitigates the negatives from their high leverage, but unfortunately does not necessarily assist them in reinstating their previous distributions. Their solid current ratio of 1.48 is further backed up by a decent cash balance, which combined with their prospects to generate free cash flow after distribution payments means that they are not reliant on credit facilities for liquidity. Even if this were to temporarily change, they still retain $389m available from their $1.4b credit facility.

They refinanced their 6% Senior Notes to their new 5% Senior Notes earlier in 2020 and thus pushed the maturity out to 2028. Assuming that their credit facility can be refinanced when it matures in July 2022, this means that they face zero debt maturities until almost the end of the decade, as the table included below displays. This further supports their ability to remain a going concern by making them more resilient to navigating any future economic turmoil. 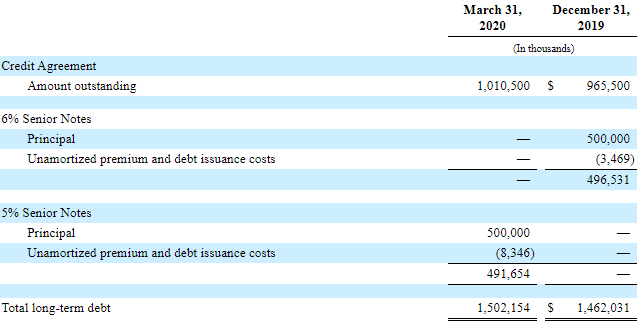 At the end of the day, the bottom line is that their new lower distribution appears safe, but unfortunately for those who purchased their units before the downturn, it appears likely that they will not be seeing their former distributions anytime within the next five to seven years. Since their current distribution yield of slightly over 10% is quite attractive in this low interest rate world, I believe that a bullish rating is appropriate.

Notes: Unless specified otherwise, all figures in this article were taken from Holly Energy Partners’ Q1 2020 10-Q (previously linked), 2019 10-K and 2017 10-K SEC Filings, all calculated figures were performed by the author.

Add Magic To Your Portfolio: 2 Dividend Growth Stocks To Buy