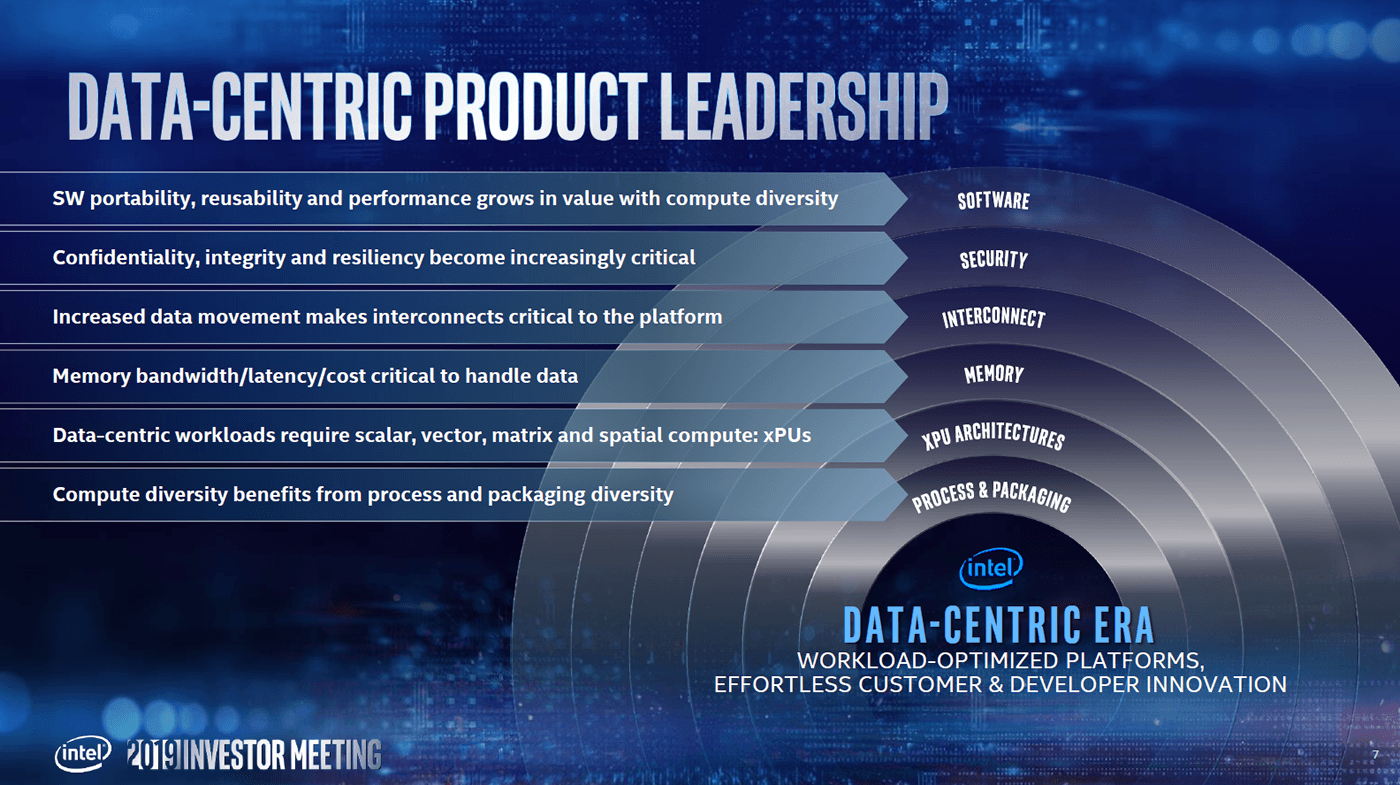 Intel’s (INTC) announcement in its 2020 Q2 earnings report that it would slip the schedule for its 7 nm process by six months was widely regarded as a stunning failure, and rightfully so. Intel is giving up on process leadership. Intel’s fall from greatness is a tragedy not only for the company and its investors, but potentially for America. 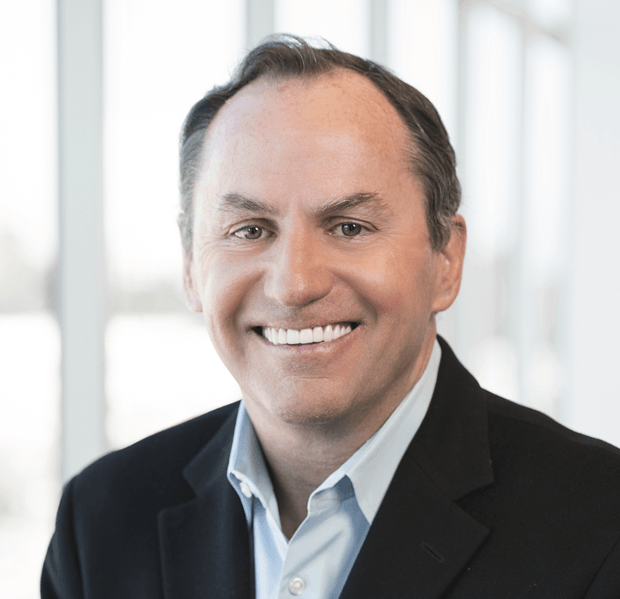 Intel CEO Bob Swan: In over his head in technology. Source: Intel.

Intel’s announcement regarding the 7 nm schedule slip seemed to come as a genuine surprise to analysts, but this has been something I’ve been documenting for years, beginning in 2018 as part of my coverage of Taiwan Semiconductor Manufacturing Company (TSM). In June, I revisited the state of Intel’s process development.

Analyst (and investor) surprise is a direct consequence of Intel’s substitution of obfuscation for execution when it came to process development. Intel has claimed process leadership even as it fell further behind TSMC in leading edge process technology.

We now expect to see initial production shipments of our first Intel-based 7-nanometer product, a client CPU in late 2022 or early 2023.

Intel’s 7 nm process was expected to be equivalent to TSMC’s 5 nm process, which is already shipping in volume to customers such as Apple (AAPL). Even if Intel makes the revised schedule, it would still be roughly a process node behind TSMC. As a reminder, TSMC’s CEO C.C. Wei indicated that its 3 nm process would be in volume production in the second half of 2022. At this point, it’s unrealistic to expect Intel ever to catch up with TSMC.

In effect, Intel is still working on the 10 nm production ramp, and Swan’s comments during the earnings call emphasized 10 nm products on the horizon, such as the successor to Intel’s Ice Lake mobile processors, Tiger Lake, and the first 10 nm Xeon server processor. Both are expected by the end of the year.

Swan also pivoted from process leadership to “product leadership” during the call:

As much as Swan tried to sooth investors about the 7 nm delay, the crisis atmosphere was only heightened a few days after the earnings report when Intel announced a massive reorganization.

Murthy Renduchintala, who had been brought in by Krzanich to serve as Chief Engineering Officer, was out. He led a Technology, Systems Architecture, and Client Group, which was dissolved. His direct reports were shuffled around a bit, but now all would report directly to Swan.

I admit I was never particularly impressed by Renduchintala, but as we’ll see in the next section, he left his mark on the company. In a May 2019 Investor Meeting presentation, he presented this chart: 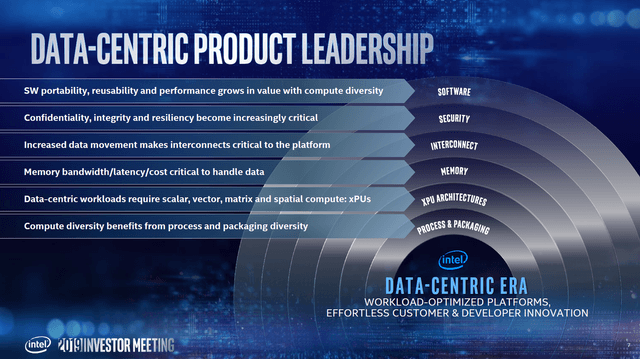 If Renduchintala became a scapegoat for Intel’s process woes, I think this was misplaced. Renduchintala was never a process guy. In any case, dissolving his organization rather than replacing him was exactly the wrong thing to do. Now Swan is going to have all these scientists and engineers reporting directly to him, inundating him with technical information he can’t hope to understand.

Prior to his ascension to CEO of Intel, Swan had been CFO at a number of technology and aerospace corporations, including Intel. He has a bachelor’s degree in business administration and an MBA.

Architecture Day tries to make the best of a bad situation

Intel’s Architecture Day on Aug. 13 was hosted by Raja Koduri, and for all practical purposes, it appears that Koduri is the successor to Renduchintala. Koduri has the title of Chief Architect and is one of the many Renduchintala direct reports who now reports to Swan.

And as Renduchintala’s successor, he seems inclined to carry on the approach shown above: 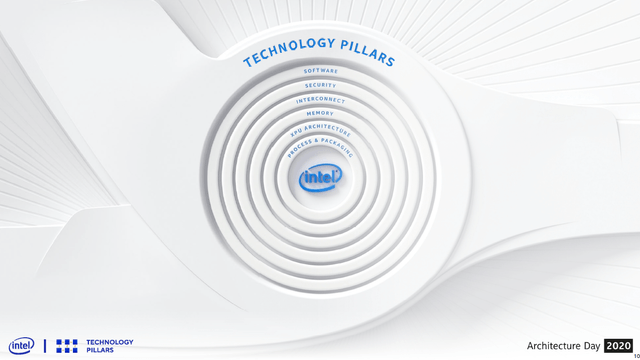 The Architecture Day presentation stepped through each of the rings, or “pillars.” In so doing it appeared that the major underlying motivation for the presentation was to make the loss of process leadership seem unimportant. And as so often happens in these cases, the harder Intel tried to make the 7 nm delay seem unimportant, the greater its importance loomed over the proceedings.

A major theme, in fact, of Architecture Day was that architectural innovation would/could compensate for a slowdown in process improvement. In the following chart that was part of Koduri’s introduction, note that transistor density improvement slows down in the “Architecture Era.” 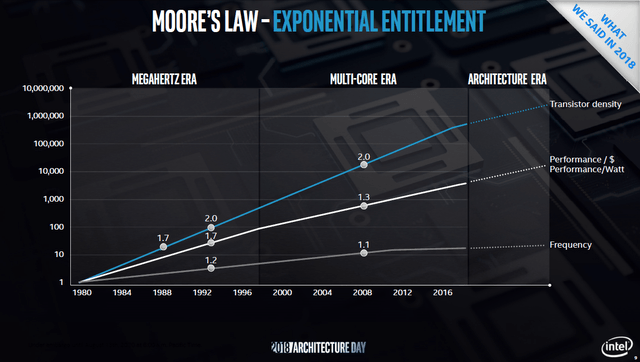 Another clue as to the de-emphasis on process improvement was that the section on Process made absolutely no mention of 7 nm. At one point, we got our hopes up with this chart, that seemed to point to something beyond 10 nm: 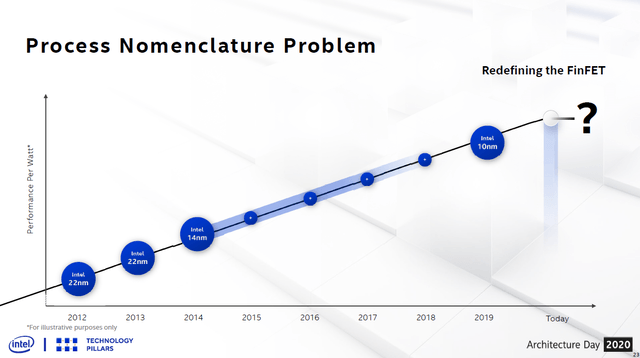 But no, what we got was “SuperFin!” And beyond SuperFin? Enhanced SuperFin! 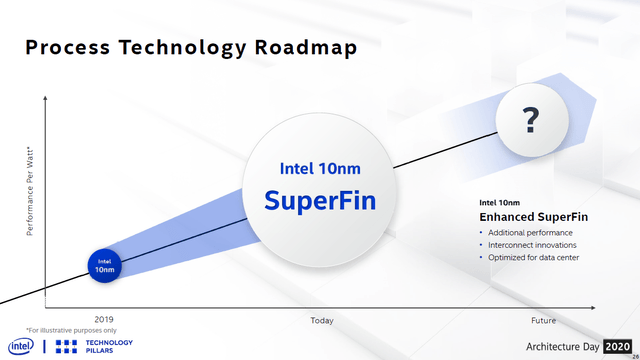 Intel would offer nothing beyond the Enhanced SuperFin, which is to say, nothing beyond 10 nm. This was just one example of Intel offering some claimed innovation by way of compensation for the lack of progress in process technology.

Don’t get me wrong. Intel’s latest variant of the venerable FinFET transistor is certainly valuable, but Intel is claiming that the improvement due to SuperFin is equivalent to a full node transition, which is nonsense.

And it was like that pretty much all through the presentation, every innovation, every architectural change became an argument for why we shouldn’t care about process improvement.

One came away from Architecture Day with the uncomfortable feeling that Intel was getting ready to give up on pursuing advanced nodes altogether, a la Global Foundries. The alternative, of course, is to go with an external foundry. This option figured prominently in Intel’s process plans for its Xe line of discrete GPUs. Intel is planning four ranges of GPUs, including a high performance gaming (HPG) variant: 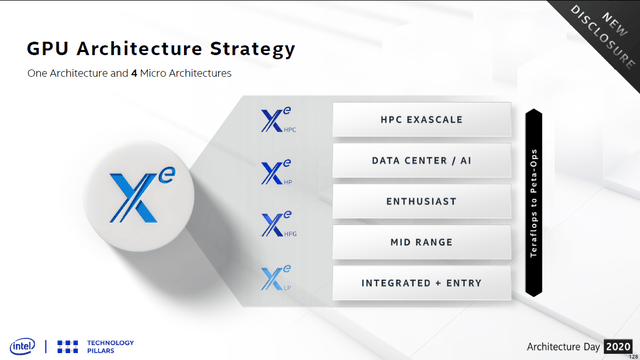 What’s especially revealing is the manufacturing processes planned for these: 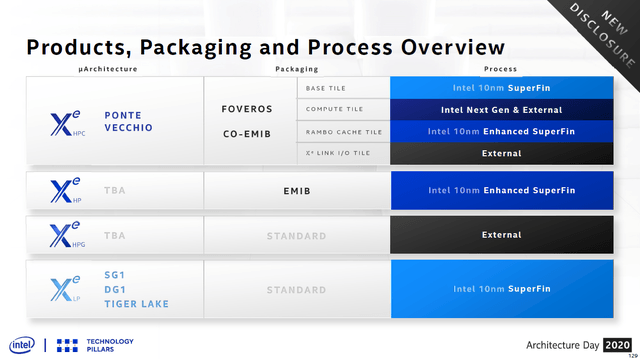 Intel already is planning to farm out the HPG chip to a foundry, presumably TSMC, since it knows it has to be competitive with 7 nm GPUs from AMD (NASDAQ:AMD) and presumably Nvidia (NASDAQ:NVDA) in the near future. Nvidia is planning a new generation gaming GPU reveal event on Sept. 1.

The HPC GPU is expected to use a chiplet architecture with multiple GPU “tiles” united by Intel’s Foveros packaging technology. The only component that appears to be intended for Intel’s 7 nm is the compute tile for the HPC GPU.

Note, however, that Intel doesn’t even call this process for the compute tile “7 nm,” but refers to the process as “Intel Next Gen.” The use of Intel Next Gen seem entirely decisionable, with “External” as an option.

My overall impression is that Swan has gotten tired of the delays, and if 7 nm falls further behind, he’ll simply pull the plug and rely on external foundries such as TSMC. Even though I’m an investor in TSMC and would welcome the boost to TSMC’s revenue, I don’t regard this as a desirable outcome.

Here there are larger issues than just the profitability of any one corporation, whether Intel or TSMC. Leading edge semiconductor manufacturing is a strategic capability for the United States that it can’t afford to lose.

I say this as someone who spent most of his engineering career working for defense/aerospace companies. I worked in areas such as military satellite communications, satellite surveillance, and missile defense.

Intel’s manufacturing capability within the U.S., which is substantial, including leading edge nodes, must be preserved and fostered. There’s really no choice here.

The question is how best to do that. Here, I actually favor spinning off the manufacturing arm of Intel into a wholly U.S. owned entity. Probably, the U.S. government needs to take a stake in this entity and provide some subsidies to further process improvement.

Such a company would have a focus on process improvement that Intel currently lacks. Intel’s R&D and capex are probably spread too thin over too many different products and technologies to provide the heavy investment in process improvement required to compete with the likes of TSMC.

Ultimately, I believe it’s the lack of focus and investment in process improvement that led Intel to its current quandary. This lack of focus and investment was rooted in hubris, a belief fostered by ex-CEO Brian Krzanich that Intel could never be overtaken in process. This hubris was the essential ingredient in Intel’s tragic fall from greatness.

Part of the reason for advocating the spin off of the manufacturing arm of Intel is that it focuses on saving the part of Intel that’s actually important to save. Many Intel supporters might see the spin off as a way to save the product business, but I take the opposite view.

As I believe Apple’s decision on Apple Silicon makes clear, x86 is on its way out, although the process will take years to unwind. Nothing that Intel can do by way of incremental improvements to architecture is going to change this.

More importantly, the foundry business spin-off addresses what’s really Intel’s most fundamental problem, which is the fact that its business model has become obsolete in the face of Apple’s new silicon paradigm. In the end, Intel’s loss of process leadership is merely a symptom of the paradigm shift.

It’s no accident that Intel lost process leadership to a company, TSMC, that has fostered, and thrived as a result of, Apple’s new paradigm. A spun off Intel foundry would finally be able to participate in and benefit from the new paradigm, rather than having to fight it.

And the fabless remainder of Intel is not necessarily doomed. Intel has a lot of products and technologies that have nothing to do with x86, including its forthcoming GPUs. A fabless Intel would probably survive in some form, especially if it adopts a new paradigm approach of integrating software and hardware into complete products. That already seems to be happening for Intel’s GPUs under Koduri, and at Mobileye.

If Intel does eventually spin off its manufacturing and packaging business, I would almost consider it my patriotic duty to invest in it. In the meantime, I think investors should avoid Intel, looking beyond the near-term surge in demand for PCs. More stumbles are likely ahead, including further delays in HPC GPUs, and 10 nm desktop and server processors.

Consider joining Rethink Technology for in depth coverage of technology companies such as Apple.

Disclosure: I am/we are long TSM, AAPL. I wrote this article myself, and it expresses my own opinions. I am not receiving compensation for it (other than from Seeking Alpha). I have no business relationship with any company whose stock is mentioned in this article.

COVID-19 Recession: No Sign Of A Recovery – The iM-Weekly Unemployment Monitor Update 8/20/2020

The Impact Of Carbon Risk On Stock Returns