Despite showing poor performance in Q2, I stand with my belief that JetBlue (JBLU) will be one of the first airlines to recover from the current crisis and thrive once this is all over. JetBlue was one of the first airlines to experience the negative effect of COVID-19, since New York and Boston, from where JetBlue operates most of its flights, became the epicenters of coronavirus at the beginning of the pandemic in the United States. However, the airline managed to survive the first wave of a pandemic and there’s a strong indication that it will successfully weather the storm, as it has enough liquidity to stay afloat for more than a year in the current environment. JetBlue also implemented several successful cash preservation measures and it has a number of advantages to tackle the disruption that will be caused by COVID-19 in the upcoming months until we find a vaccine against the virus. For that reason, I continue to hold my long position in JetBlue and have no plans to sell it anytime soon.

Since JetBlue operates the majority of its flights from two of its hubs in JFK and Boston Logan, the airline quickly experienced the disruption that COVID-19 caused to its operations at the beginning of March, when the virus started to spread in New York and Massachusetts. While the company’s Q1 results were disastrous, its performance in the Q2 was even worse. In its latest earnings report, which was released this week, JetBlue said that its revenues from April to June decreased by 89.8% Y/Y to $215 million, while the capacity was down 85% Y/Y. The company also had a total load factor of only 33.8% and its RASM (revenue per available seat) declined by 32.2% Y/Y. The only positive thing was that JetBlue managed to do is to decrease its daily cash burn to $9.5 million, below its previous estimates of $11 million. Other than that, there was nothing else positive about the results and the company needs to adapt to the current environment to survive this crisis. The same is also true for every other airline since the stock performance of other major airlines deteriorated since March and their shares will likely continue to trade in a distressed territory in the foreseeable future. 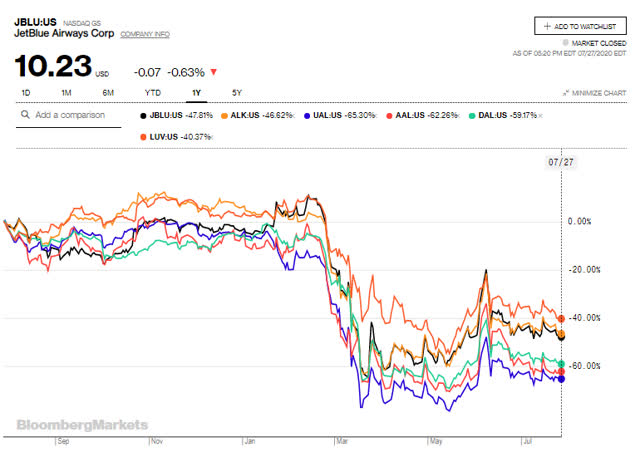 The good news is that JetBlue managed to survive the initial wave of the pandemic and the company’s management clearly understands the need to adapt to this new environment until things get back to normal. During the latest conference call, JetBlue’s CEO Robin Hayes laid down the company’s next steps:

As we move into recovery, we have laid out a three-step framework to set JetBlue up for success and emerge stronger. The first is to reduce our cash burn. The second step is to rebuild our margins. The third and last step is to repair our balance sheet.

Another good news is that JetBlue has enough resources to achieve those goals. Last month the airline used its slots at JFK, LaGuardia, and Washington Reagan as collateral to receive a $750 million loan at a 5% annual interest rate with a maturity date of June 17, 2024. It also executed a sale-leaseback transaction in which it gained an additional $120 million. Those moves, along with the net proceeds from the CARES Act, helped JetBlue to increase the airline’s liquidity position to $3.4 billion. The company also currently evaluates the possibility of getting an additional $1.14 billion loan from the government and it plans to benefit from the upcoming HEALS Act, in which there would be additional stimulus packages for the airline industry. Considering all of this, we could safely say that JetBlue has more than enough liquidity to stay long enough afloat to achieve the three-step framework that the CEO announced. 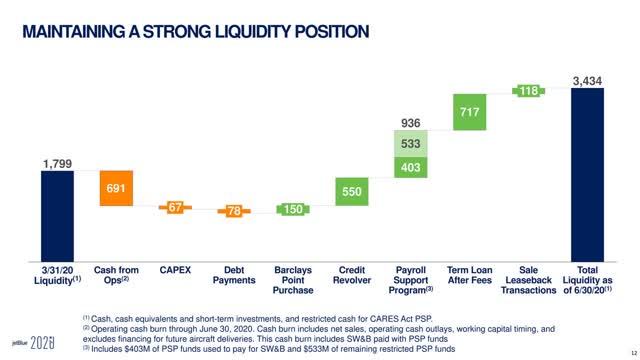 JetBlue’s debt situation is also manageable. The airline’s total debt stands at $4.78 billion and the majority of that debt doesn’t mature anytime soon. In Q2, JetBlue spent $108 million in debt, lease, and interest expenses and it expects to spend around $133 million on debt in Q3 and Q4. 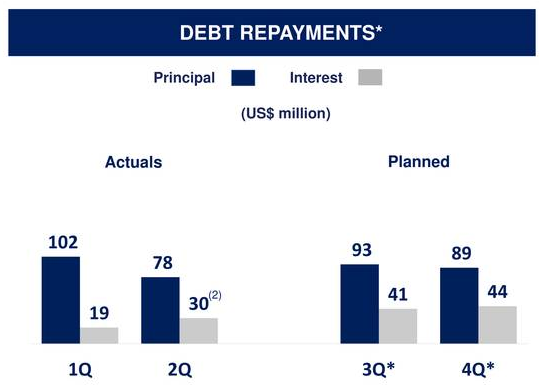 The biggest advantage of JetBlue is that it’s smaller in size in comparison to its legacy rivals and it’s easier for it to adapt to the current environment. While competitors load up on debt and increase their likelihood of bankruptcy, JetBlue will be able to survive thanks to its efficient business model. The airline doesn’t operate as a traditional hub-and-spoke carrier and it mostly transfers O&D traffic. Its biggest customers are leisure travelers, which tend to return to flying faster in comparison to business travelers. This will help JetBlue to increase its Caribbean and Latin American load factor much faster in comparison to others.

JetBlue also has a small international presence at the moment when compared to its rivals, which is a positive thing in the current environment. With enough time and liquidity on hand, the airline has an opportunity to prepare the inaugural launch of its A321LR flight to London in late 2021, which will help it to start expanding its transcontinental route network. Since a number of European airlines such as Norwegian Air already became bankrupt, there’s an opportunity to gain an additional market share once things return to normal. As the first A321XLR is expected to come in 2023, JetBlue has enough time to prepare the strategy for international expansion.

The biggest downside of JetBlue is that it doesn’t have control over the events that impact its operations. COVID-19 will continue to hurt the airline’s bottom line and until we find a vaccine, it will not be able to return to its pre-COVID-19 profitability levels. At the same time, the 14-day self-quarantine for those, who travel to New York is going to hurt JetBlue in the short-term, since the majority of its flights are operated in the JFK airport.

However, despite those risks, JetBlue managed to successfully preserve cash and increase its liquidity, which will help it to recover quickly that its major competitors. While the revenues in Q3 forecasted to be down 80% Y/Y, the airline’s operational expenses will also be down 35% Y/Y and its daily cash burn will decrease to $7 – $9 million from an average of $9.5 million in Q2. There’s no doubt that the recovery of air travel is not going to be linear, but JetBlue has enough liquidity for more than a year. This will help it to weather the current storm and thrive once this is all over.

Disclosure: I am/we are long JBLU. I wrote this article myself, and it expresses my own opinions. I am not receiving compensation for it (other than from Seeking Alpha). I have no business relationship with any company whose stock is mentioned in this article.