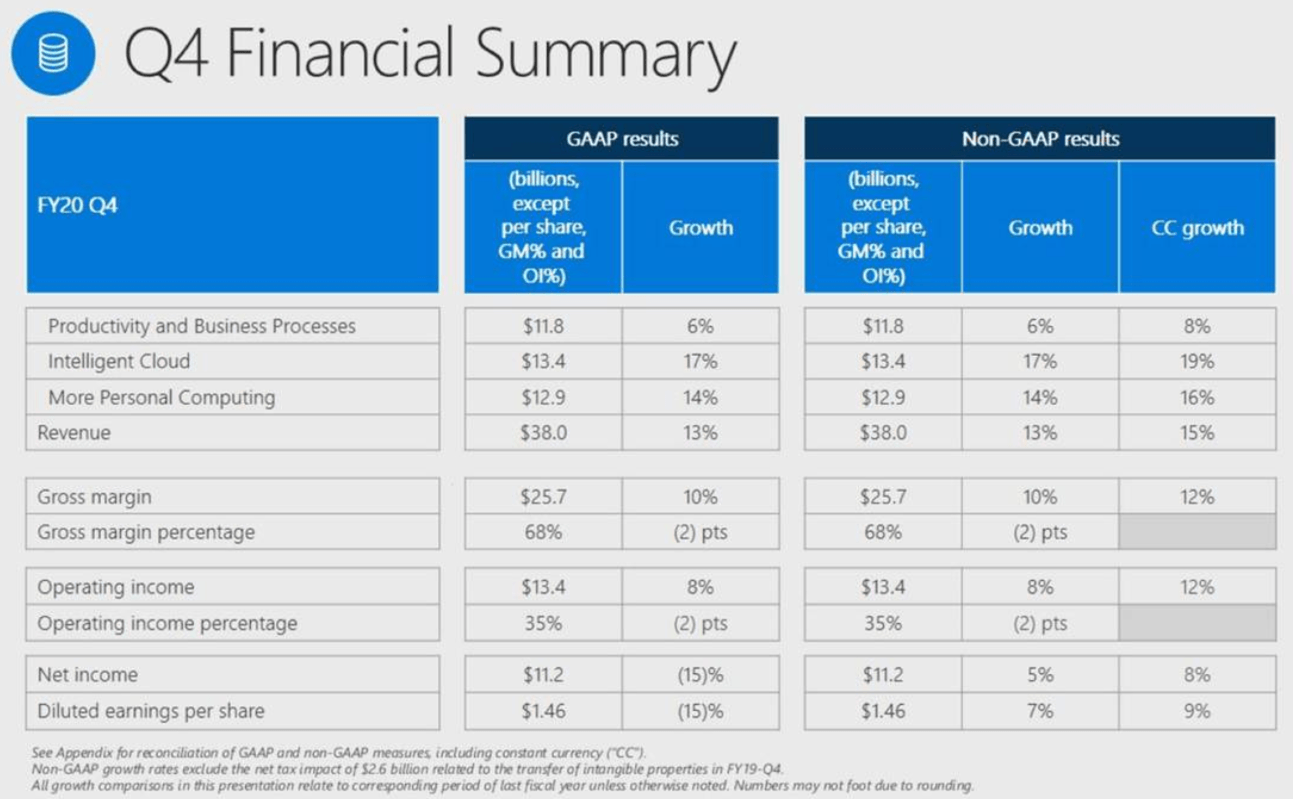 Microsoft (NASDAQ:MSFT) is back in headlines on the potential acquisition of U.S. rights for video-sharing mobile app, TikTok. The news seems to have bought some relief to investors who seemed a tad bit disappointed with the performance of Azure and Office 365 in the latest quarter.

In the fourth quarter, Microsoft reported solid numbers surpassing most of the consensus estimates. However, investors and analysts are disappointed with Azure’s performance, which has lately become the key growth driver as well as the share price driver for the company. Investors are also concerned about margin weakness. The bearish sentiment has got reflected in the company’s share price movements. Post earnings, the stock is down by 3.18%. The stock remains 30% up YTD.

The current knee-jerk reaction in share price can prove to be a decent entry point for retail investors. Although Microsoft is still not at all cheap, its high share price and valuations are pretty justified by its solid growth prospects. I believe that this may be a good time for retail investors to at least start a small position in the stock and then build up over the next few months. 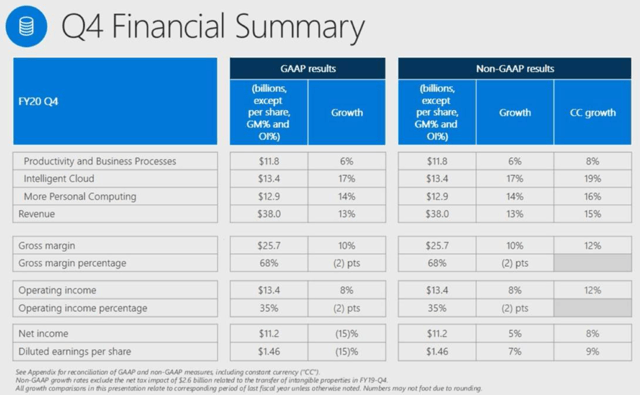 To start with, we will take a look at some important performance numbers in Microsoft’s fourth-quarter earnings.

Let us now focus on the pros and cons of the company in greater detail.

In the fourth quarter, Azure’s revenues jumped YoY by 47%, ahead of the 43% growth rate posted by Alphabet’s (GOOG) (GOOGL) Google Cloud and 29% posted by Amazon’s (AMZN) AWS. Companies across sectors that include top consumer organizations are trying hard to shift much of their business to the cloud. Even companies from impacted industries such as travel and hospitality are trying to take advantage of the cloud-based platforms and data analytics. Many companies are also transitioning from on-premise data centers to hybrid or public clouds. Amidst the pandemic, cloud services have emerged as more of a necessity as companies are forced to handle a distributed workforce. Azure continues to benefit from remote working trend and has even been taking some business from AWS.

Microsoft Azure’s long-term growth story is also intact. The company saw commercial bookings jump 12% YoY in fiscal 2020, mainly driven by contract renewals and new long-term contracts for Azure. Commercial remaining performance obligation has spiked by 23% YoY to $107 billion. Here, while half of the obligations are to be recognized in the next 12 months, the remaining are for a period beyond the 12 months. This highlights that customers have entered into multi-year contracts for Microsoft’s cloud solutions.

Microsoft is also banking on healthy growth in subscriptions for its cloud-based commercial services such as Microsoft 365 and Dynamics 365. Business productivity suite, Office 365’s subscription-based model, fares better in terms of revenue predictability as compared to Microsoft Office’s licensing model. Microsoft 365 bundle of services include Office 365 and other Windows services, offered to customers as a single plan. Microsoft 365 and Dynamics 365 have fast become major revenue and cash flow drivers for the company.

The company is going strong in consumer-facing businesses

Microsoft’s consumer businesses such as Windows, Surface, and Xbox are also seeing exceptional growth in this COVID-19 wreaked world. Personal Computing has proved to be a resilient business in this pandemic.

While the growth of Windows and Surface may eventually flatten out, the gaming business can be a long-term beneficiary of the change in consumer behavior. More than the hardware, it is the software side of gaming which has been booming in 2020. The gaming revenues are mainly coming from increased subscriber base for Xbox Game pass, across both console and PC. The company has also included xCloud, a highly famous cloud gaming service, in the Xbox Game pass suite. While Xbox content and services revenues climbed up 11% YoY to $943 million in fiscal 2020, hardware revenues, however, were down by 10% YoY.

There is more to the gaming business beyond the play-at-home trend due to the pandemic. The gaming business is definitely one to watch out for in the coming quarters, considering the launch of Xbox Series X and Sony’s PlayStation 5. This implies more advanced gaming services for advanced hardware. Xbox Game Pass currently has over 10 million members across 41 countries. With the company seeming to phase out Xbox Live, we can expect most of its 100 million subscribers to eventually shift to the more lucrative Game Pass. The company aims to expand its gamer base to 2 billion-plus members.

On July 31, CNBC reported that Microsoft is in talks to purchase U.S. operations of TikTok. The deal involves significant political risks. However, if successful, it will be a strong move by Microsoft on the consumer social media front. This business can get in a ready audience of 100 million mostly young U.S. members, a huge audience base that is yet to be monetized effectively. The deal can further extend Microsoft’s position in the consumer business segment.

All these acquisitions highlight Microsoft’s targeted strategy for high-growth opportunities.

Although there are few challenges for the company’s enterprise and consumer business, Microsoft seems well-positioned to weather most of them. The company’s current ratio is around 2.90x, which implies that current assets are more than sufficient to satisfy any immediate liabilities. The company had total cash worth $136.53 billion at the end of the fourth quarter, almost $2.7 billion higher on a YoY basis. This is definitely commendable, considering the company’s significant investment in acquisitions in the fourth quarter. Microsoft’s total long-term debt is close to $59 billion, lower than $66.0 billion on a YoY basis. The company’s operating cash flow of $60 billion and a free cash flow of $45 billion for fiscal 2020 are definitely big positives. The leverage is very manageable, considering that the company can completely pay off the long-term debt with available cash and still have a huge balance left.

Investors have to be aware of these risks

The biggest concern for Microsoft investors has been the deceleration in Azure’s YoY revenue growth from 59% in the third quarter to 47% in the fourth quarter. However, there are two things that we should remember. A part of the declining revenue growth is an outcome of increasing base. In this context, the 47% rate definitely does not seem to be a weak growth.

Additionally, the impact of an industry-wide trend has also played a role in getting down revenue growth rates of not only Azure but also of AWS and Google Cloud in the recently closed quarter. Although there is no slowing of the shift to cloud services, there is definitely an increased focus by enterprises on cost-cutting and efficiency. This means optimizing cloud usage and opting for best practices to get the best return for the buck. The deceleration in usage may have a short-term impact on Azure’s growth. However, there is a limit to cost-cutting. Hence, in time, the ever-expanding consumer base will almost completely offset the impact of declining usage.

Although Azure and Office 365 seemed to have decelerated a tad bit in the latest quarter, these enterprise businesses will continue to benefit from the broader work-from-home, play-at-home, and learn-from-home trends.

The COVID-19 pandemic triggered digital transformation has been a net positive for Microsoft. However, the recession has affected the SMB (small and medium business) segment, which has been a key customer base for the company. This has affected Microsoft’s transactional Office and Windows OEM-Pro sales. SMB players are some of the key consumers for Windows PCs. The SMB weakness is also affecting Office 365 commercial bookings as well as advertising spend on the company’s search platform. LinkedIn sales have also dropped as there is reduced hiring activity in the market. Microsoft expects the SMB weakness to have an adverse impact on transactional sales of Office and Windows OEM in the first quarter of fiscal 2021.

Microsoft reported a two percentage point YoY decline in gross margin as well as operating margin in the fourth quarter. Net income also declined YoY from $13.0 billion to $11.0 billion. But investors need to understand that much of the increased expenses are related to the development and marketing of its commercial cloud products. The company is focused on adding more customers and developing innovative solutions in its commercial cloud portfolio. Investing in cloud and gaming markets will most likely result in much better returns in the coming years.

Investors are also feeling a tad bit let down by the company’s management for missing some high-growth opportunities. Notable here is Skype, the company’s video platform which was once a giant and has been completely surpassed by rivals like Zoom (NASDAQ:ZM) and Houseparty. This is especially hurting, considering the huge market opportunity in the global video communications space. The company’s plans to close its Mixer gaming service amidst the play-from-home trend is also seen as a lost opportunity by some investors.

Then, again, although the company’s consumer-facing Personal Computing segment has performed exceptionally well in 2020, it nevertheless is a cyclical business. Hence, as the positive influence of COVID-19 related device purchasing gets exhausted, we may start to see the negative impact of reduced discretionary spending in this business.

Finally, like all big technology companies, Microsoft is also exposed to a significant degree of regulatory and legal risk. In July, Slack (NYSE:WORK) filed an antitrust complaint against Microsoft in the EU. Ironically, however, the company was spared from the Congressional hearing which saw competitors like Apple (NASDAQ:AAPL), Amazon (NASDAQ:AMZN), Facebook (NASDAQ:FB), and Google being questioned over market power and antitrust issues.

What price is right here?

The majority of analysts have a positive opinion about the company. The company’s dividend yield is about 1%. The company has returned $35 billion to shareholders in fiscal 2020.

Despite a few hiccups in the latest earnings, Microsoft continues to be a company with a solid foundation. The company stands to benefit significantly from the secular tailwinds in the cloud market mainly due to its formidable position in the enterprise segment. Hence, the stock is definitely a very attractive pick for retail investors with a time frame of one year and average risk appetite.

Salazar To Drill Up To Four Projects By Year End

Veritone Is Trading On AI Hype With 70% Downside