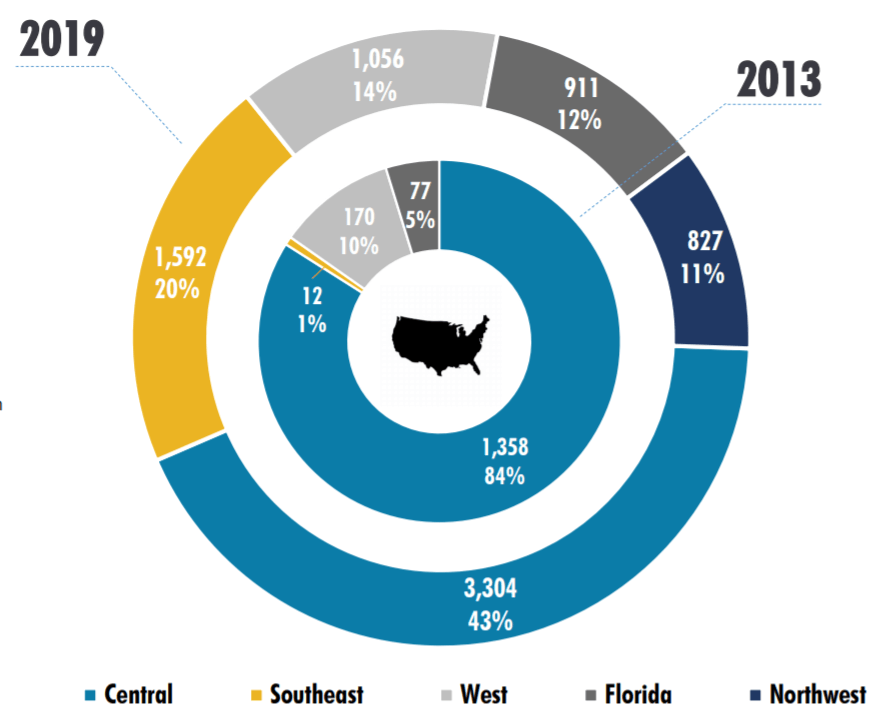 Since the March lows, LGI’s (LGIH) share price has more than doubled, returning to pre-corona price levels, despite growing concerns about the economy in general and their niche in specific. This was probably fueled by optimism over the recent positive headlines of a surge in new home sales and builder sentiment.

However, we think there are serious threats to LGI’s future growth, threats that are mostly overlooked by investors. We first think that the growth and performance of the company so far have been much due to major tailwinds. Secondly, we think their value chain will now be tested for the first time, with big question marks on its sustainability.

We boiled it down to three main points:

Spoiler: the stock is overpriced.

LGI Homes is a quite well-known homebuilder, so not much intro is needed. For those who are less familiar with the company’s unique value chain, there are great articles about the company, with the best being a profile piece from 2014 and their win of “Builder of The Year 2016”.

There is one important piece of the intro: The company started in Texas. They have expanded since, but still, it plays a major role in the company’s portfolio. The importance of this will be elaborated later. 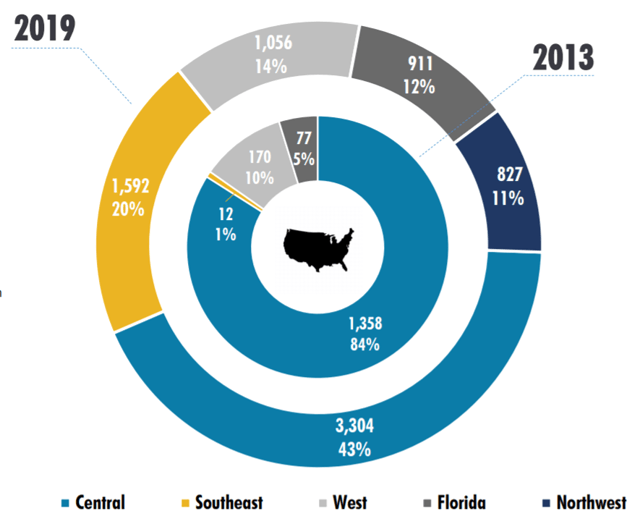 1. Reliance on the USDA program

The company’s value proposition relies heavily on offering its customers an option to buy with little or no down payment with mortgages backed by the FHA, USDA, or VA. These backed loans have increased dramatically over the years, with the USDA loans in particular.

The program was created in 1991 as a way to support growth in homeownership in “rural areas” (the definition is wider than you think). There are conditions to be eligible for a USDA-backed loan, (for example, the borrower’s income can’t exceed 115% of the median county income, and the loans are restricted to areas with lower population density) but still, the qualification levels are very high, in most of the growing towns in the country. The loans are made by private investors, sold to third-party (Ginnie Mae), and insured by the government.

The program took a different turn in the GFC, drastically expanding by attracting buyers with the option of the no-down-payment terms. Since 2008, the funding has grown from $6.2B in 2009 to $12B in 2010, then another increase to $24B in 2011 where it stayed to this day. Many homebuilders, including LGI, have gained greatly from these programs.

This is mostly overlooked in the analysis of the company, but this program and its growth played a major role in LGI’s growth. We view this as a major issue when evaluating the company and its future growth. A change in policy and reduction of the plan could have a very negative impact on the company. There has been some criticism of the program, so we think it is a viable option. Having said that, given the current environment, it is less likely in the near term but certainly an issue for the long term.

The company had tremendous tailwind in the form of a strong undersupply in this market since the GFC and also the general economy rebound, as seen in the low level of new housing unit starts, a decline of existing home sales and a return of prices to pre-crisis levels: 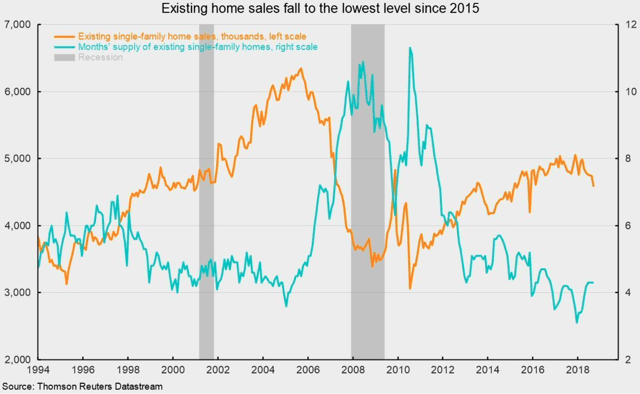 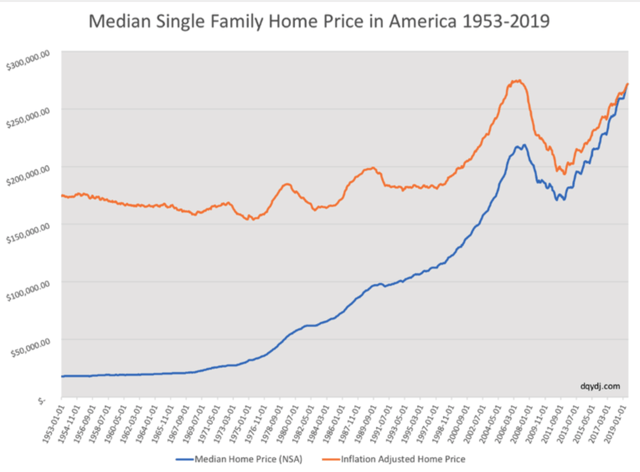 These two factors combined raise a question regarding the viability of the speculative building in an oversupply environment. In 2008, there was an increase in existing home sales, but it was offset by the major increase in the USDA funding, so the viability wasn’t tested. So far in this crisis, the low-interest rates combined with the decade-long under-building of houses have yet to test the company. We do think that a scenario where the USDA funding does not increase or even decreases, combined with an increase in the supply of existing homes, might create a problem for LGI’s demand. And in speculative building, where you have a lot of move-in ready homes at all times, a big drop in demand hurts the margins very fast and in severe conditions (mainly duration) might even cause liquidity and debt servicing problems. We feel this is a point that is overlooked by many investors and should definitely be taken into consideration in valuation.

3. The business model wasn’t tested, but it might be now

The company boasts itself as being profitable even during the GFC. They were, but it’s not only because they are a good company with great management, but the location also played a big role. At the time they were still a very small company that had operations in Texas in areas that weren’t hurt much. 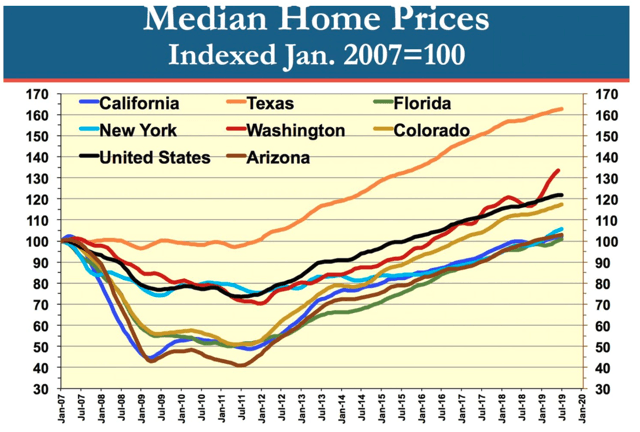 Not only was it not hurt, but the company also had many opportunities, as said by the company’s president Eric Lipar in an interview in 2009:

Lipar says his company is gearing up for what he anticipates will be “lots of opportunities” to pick up distressed property taken over by banks “for 20, 30, 50 cents on the dollar.” The builder will open two new communities this year, and neither Lipar nor Snider seems worried that the housing recession could linger for a couple more years. “Apartment rent and occupancy [rates] are on the rise,” says Snider. “So we believe the downturn is positive for our business.”

And it’s not that LGI was unique in their profitability in Texas in the GFC, even DR Horton (DHI), that even then was one of the largest homebuilders in the country, was profitable in Texas (South Central, and there only…):

This time, it seems like the coronavirus crisis might lead to a serious test for LGI’s model. And by the model, we mainly focus on their reliance on 100% spec houses, a method that many builders relied on before the crisis and since abandoned (only as an addition to existing projects and in small numbers).

There seems to be a “perfect storm” in Texas – an abundance of the service-sector, the oil industry, and the airline industry, all massively hurt, some possibly for a very long time. There is almost a consensus that Texas will not go unscathed again, and combined with the expansion to many more markets, it seems that LGI’s model will be put to a serious test for the first time. There might be a reason most homebuilders stay away from spec building.

The counter – there are new tailwinds:

Having said that, we think there is a new potential tailwind that might provide offset to the general economic projections and the specific questions regarding the past tailwinds.

These points are discussed intensively in the news so there is no need to elaborate but there are two trends that we think could provide a tailwind for the industry – de-urbanization and work-from-home. The combination might create serious demand for LGI communities.

It seems that during the pandemic, mainly in lock-downs, many people started rethinking a move to the suburbs. Real estate agents across the country are reporting a surge in interest for suburban homes, with people focused on large back yards. This has been seen very strongly in Connecticut and across the tri-state area in general.

Combined with the move towards work-from-home, the trade-off of moving further away from the center to the suburbs is changing. It seems this change is permanent, with some surveys showing as much as 67% of companies having long-term or permanent plans for remote work. This confidence allows workers that have moved to a remote model to find a house in the suburbs without making sacrifices with long commute times.

Despite the challenging environment we encountered at the end of the first quarter, our business was stronger in April than we had originally expected and we are seeing positive momentum in recent sales trends that leads us to believe the impact from the COVID-19 pandemic may be less severe than we had originally expected. We are building, selling and closing homes across the nation every day and our customers are telling us that they are more ready than ever to move out of densely populated living situations and into homes that offer more space and privacy. As a result, our outlook for the coming months is tempered, but positive.

Also, the record low mortgage rates will boost demand, at least in the short term, which shouldn’t be diminished, it is important in helping the company get through the crisis. 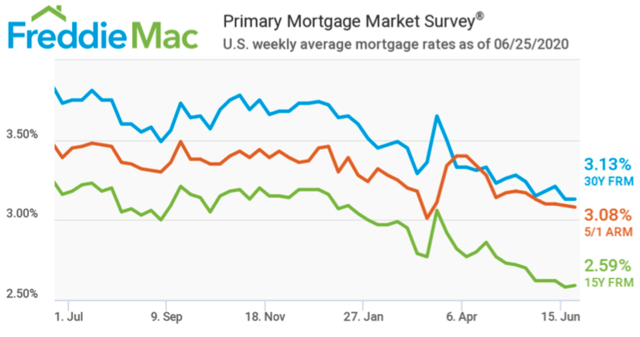 How this adds up in the numbers

First, gross margin – there are major differences in the margins between regions, so as the company expands from Texas (the best performer), the margins keep decreasing:

To off-set that decrease, the company has managed to decrease SG&A/Rev so that the operating margin has even improved:

Based on this, we think it should be conservatively assumed that in the future the gross margin would continue to decrease and that the operating margin will also decrease but not by much, around 11.5%

Given that one of the risks we outlined happens, and the demand-supply equation changes (the big surge in top-20 builders entering the field won’t help), we think it should be assumed that the community growth rate will be similar to their slowest years, around 12%. Also, prices will decrease for two years at least.

We also think the monthly absorption rate might decrease, from 6.7 now to more historical levels, when the market wasn’t in such a run, to around 6.

Combining all of this, by 2025 the community count should be around 203, with a monthly absorption rate of 6, which means around 15,000 closings.

Source: LGI 10-k and own assessments

Connection the dots (and conclusion):

There are reasons for optimism, from the positive builder sentiment to the recent surge in applications fueled by record-low mortgage rates that look like they might stay for a long time. There are also new tailwinds for the company that might offset the general economic negative outlook and the specific major problems in Texas. Also, the company has moved fast in the crisis and management is very optimistic (well explained here).

Having said all that, as mentioned, there are big risks that are mostly overlooked, both as a massive headwind and also as a specific stress test to the company’s basic model. Given the level of debt, the stakes are high for such a test. Maybe there is a reason why all the other companies stay away from this level of speculative building.

At a certain price, more around $50, we think the risk-reward equation is interesting since it includes a mediocre future that does take into account much of the risks we think are relevant. But now, at $113, we think the downside potential is very large and any deviation from the highly optimistic view this price represents might lead to a big drop in the price.

DMC Global Lost Market Share, But Prepares To Wrest It Back

US Recession Watch, July 2020 – Shapes of the Recovery: J-Curve

A New Economic Cycle Has Begun