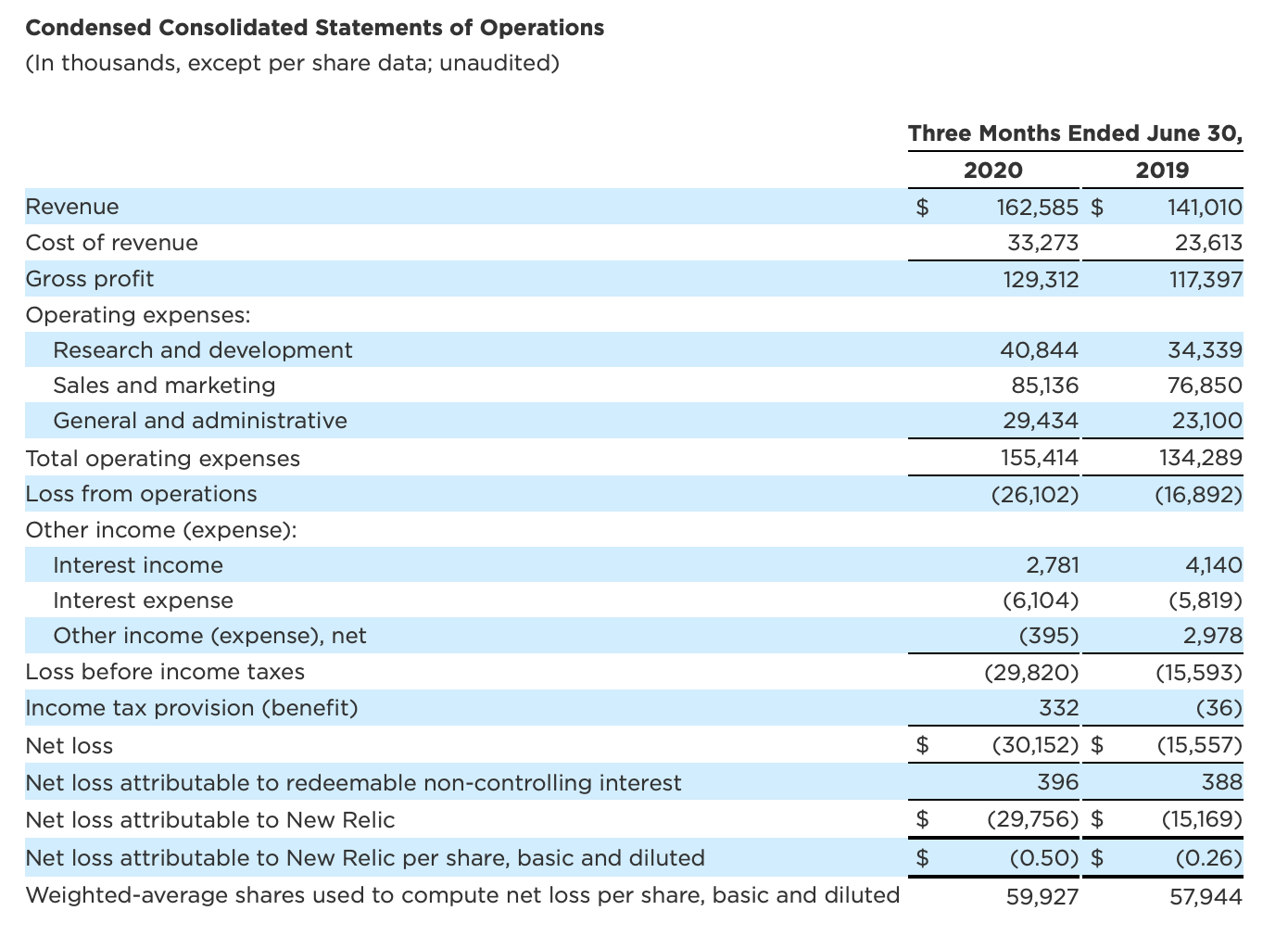 This article was highlighted for PRO subscribers, Seeking Alpha’s service for professional investors. Find out how you can get the best content on Seeking Alpha here.

Very few hardcore enterprise software companies have reported earnings so far (due to a January year-end for most of the group), but New Relic (NEWR), the original infrastructure monitoring company that was quickly displaced by upstart Datadog (DDOG), has already emerged as one of the big losers. Despite a decent beat to Wall Street’s estimates in the quarter – which, for New Relic has been rare over the past few quarters as the company works through sales execution issues, has been fairly rare – shares of New Relic peeled back ~20% in the immediate aftermath of earnings.

Instead of focusing on the robust results, investors turned to the future and the risks associated with the rollout of New Relic One – an umbrella platform that now houses all of New Relic’s products in an attempt to simplify and unify its sales strategy to compete with the growing Datadog threat.

And indeed, in this infrastructure monitoring space it has been a dog-eat-dog world (forgive the pun). While Datadog shares have more than doubled since the start of the year on the back of incredible >80% y/y revenue growth, New Relic has been one of the few software stocks to actually decline in the year to date, logging ~15% declines as the company’s revenue growth decelerated down to the mid-teens.

The question for investors now: is New Relic beyond saving? Or is there reasonable hope that the company can rebound from the dip?

I like New Relic for a number of reasons:

What I’m getting to is that there’s a strong value element for New Relic. At current post-earnings share prices of $55, New Relic trades at just a $3.36 billion market cap (less than half of all-time highs notched in mid-2018) – and after netting off $828.9 million of cash and $432.5 million of debt on New Relic’s balance sheet, its enterprise value is juts $2.97 billion. Versus FY22 (calendar 2021) revenue estimates of $762.7 million for New Relic (per Yahoo Finance), the company trades at just 3.9x EV/FY22 revenues.

That puts New Relic at least one turn below most other mid-teens/low 20s growth stocks. Right now, a lot of investors are concerned about New Relic’s massive strategy change and platform migration onto New Relic One, and offering entirely new pricing stacks and a free tier. While it’s true that these wholesale changes to go-to-market strategy can certainly produce lumpy results, I’d say that a <4x forward revenue multiple already prices in that risk.

New Relic is the type of stock you have to be patient with. This year, momentum-based trades have only shot higher while penalty box stocks have remained stubbornly stuck in the shadows. But in the long run, New Relic still owns a valuable piece of technology in a hugely growing market (as demonstrated by Datadog’s gaining popularity) and plus runs a business capable of producing near-breakeven profits and positive cash flows. That, to me, means the risk-reward ratio falls squarely on the side of bulls.

Let’s now dissect New Relic’s second-quarter results in greater detail. I’ll acknowledge it wasn’t a perfect quarter, with some points of weakness to call out – however, I’d say the ~20% drop in share prices post-earnings more than compensates for that. The earnings summary is shown below: 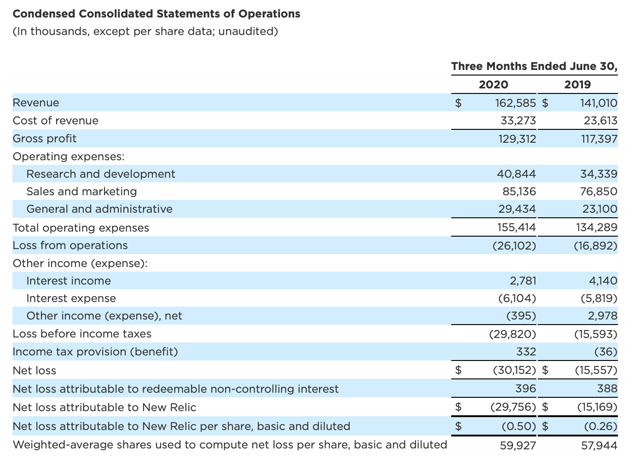 New Relic’s revenues grew 15% y/y to $162.6 million, beating Wall Street’s expectations of $158.4 million (+12% y/y) by a solid three-point margin. We note, however, that New Relic has seen the same headwinds as many other backend-facing enterprise software companies have seen in the wake of the coronavirus, with revenues decelerating from 21% y/y growth in Q1 (and last year, New Relic’s growth averaged around the mid-20s). Amid the remote-work surge, the priority among IT departments have been to ensure continued uptime and connectivity for all employees, as well as to continue supporting customers digitally. Backend projects like infrastructure monitoring have likely taken second fiddle in importance this year.

At the same time, the increased reliance that we have placed on our digital tools have only cemented the long-term need for reliable monitoring tools. And at a time when many organizations are re-evaluating their IT stack to ensure business continuity, New Relic has decided to take the opportunity to simplify its product offering and consoldate it all under one umbrella called New Relic One.

Here’s a comprehensive roundup of the major product changes that New Relic is rolling out, per CEO Lew Cirne’s Q1 earnings call remarks:

July 2020 was perhaps the most important moment in New Relic’s 13-year history with the possible exception of our initial launch in June of 2008. In the last two weeks alone, we have made five major announcements. The first announcement was our commitment to open source release of all of our agents for APM, mobile, browser, infrastructure and all of our infrastructure integrations. Our second announcement was the dramatic simplification of the New Relic product portfolio, from 11 SKUs to just three powerful comprehensive products in one unified platform.

A few thoughts here. Many investors are concerned that these radical pricing/go-to-market changes will introduce volatility, and while that assertion isn’t wrong, it’s near-sighted. On the open-source side, we’ve found that many other companies like Red Hat (now part of IBM) have continued to see success despite open-sourcing a portion of their technology. Offering a new free tier also helps to extend New Relic’s sales pipeline potential, especially among smaller “self service” customers that New Relic may not have the sales bandwidth to prospect for proactively. New Relic is already well-represented in large organizations (several examples of large clients include the Hearst papers and tax provider H&R Block), but part of the company’s new strategy is, per Cirne’s commentary, “renewed commitment to developers and startups at a grassroots level.”

Of course, large platform changes will bring some underlying noise – net expansion rate in the quarter, for example, dipped to 100% (meaning neither net churn nor upsell). But I believe that once we move further past the platform migration, we will begin to see normalization.

While this new offering certainly introduces uncertainty into the picture, it also gives New Relic a marketing buzz and re-energizes its sales force, which is key in taking on increased competition against Datadog which has grabbed all the recent headlines.

In the meantime, New Relic also continues to post strong profitability results. Pro forma operating margins remained flat at positive 5% despite the revenue deceleration, and the company’s pro forma EPS of $0.15 resoundingly beat Wall Street’s $0.03 target. And as shown in the chart below, New Relic’s free cash flow still grew 23% y/y to $23.3 million, while FCF margins boosted one point to a respectable 14%.

With a ~20% drop in share prices and a resulting <4x forward revenue multiple, the market seems to be saying New Relic’s platform transition will be ugly even though we’ve barely seen any results yet. I think investors can benefit from taking a contrarian position here and buying New Relic while it’s still in the penalty box.

For a live pulse of how tech stock valuations are moving, as well as exclusive in-depth ideas and direct access to Gary Alexander, consider subscribing to the Daily Tech Download. For as low as $17/month, you’ll get valuation comps updated daily and access to top focus list calls. This newly launched service is offering 30% off for the first 100 subscribers.

Disclosure: I am/we are long NEWR. I wrote this article myself, and it expresses my own opinions. I am not receiving compensation for it (other than from Seeking Alpha). I have no business relationship with any company whose stock is mentioned in this article.

ArcelorMittal Outperforms On Costs As The Industry Deals With Absent Demand

Bitcoin Price Continues Rally, Positive Sentiment Is Off the Charts

Salazar To Drill Up To Four Projects By Year End