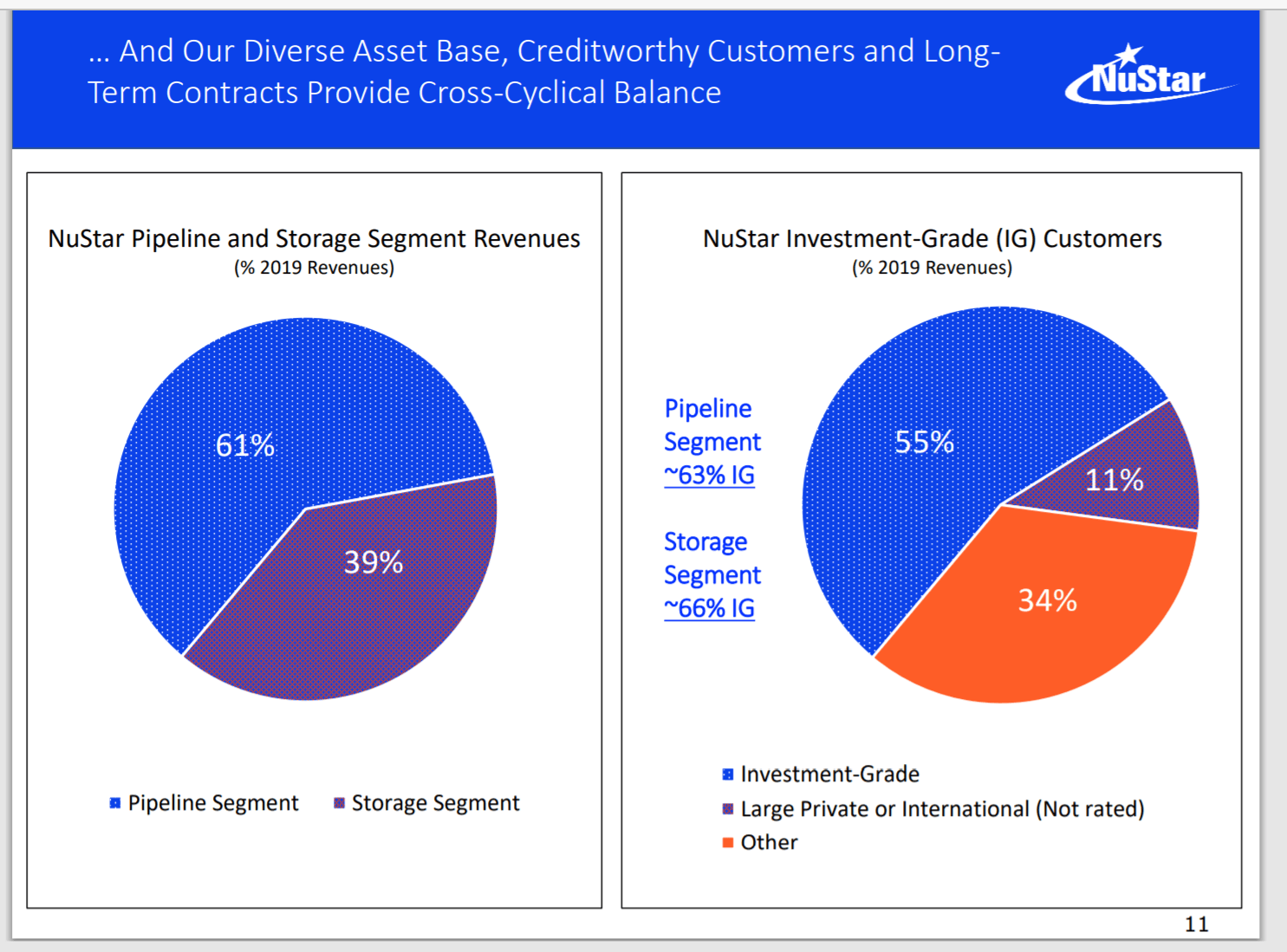 Nustar (NS) has one of the lower debt ratios in the business. That is getting to be more important as the United States battles the uncertainties of the coronavirus challenges. About a month ago, the market was certain that the coronavirus was heading into the rearview mirror. But some recent steps backwards by key states has Mr. Market in a quandary. Nonetheless, the lower debt companies are likely to survive this mess in far better shape than the higher debt crowd.

“Distribution coverage ratio was 2.8x, and the Debt-to-EBITDA ratio was 3.73x.”

In the second quarter the distribution coverage ratio was still a decent 1.43 while the debt ratio increased to 3.94. Given everything that happened to the economy in the second quarter, those results clearly standout in the midstream industry as good results.

NuStar clearly has the current coverage and the low debt to handle the situation. Even if the capital markets contract (as often happens in a situation like the current one), NuStar is far more likely to have the ability to refinance its debt than some of its more leveraged competition. An unfavorable debt due profile is far less of a concern when the overall debt ratio is low as shown above.

In some cases midstream debt has been discounted as well. Therefore investors in midstream need to watch all the various investments to determine which investment is desirable for them. Generally the debt will rally first followed by the preferred and then the common. However, this latest downturn has been remarkable by a number of measures. Therefore historical relationships could take a short term “break” to provide an unusual investment opportunity.

Whether or not an investor wishes to invest in a certain security of NuStar depends completely upon their on risk tolerance and profile. Another factor would be the additional projected return needed to invest further down (or lower) on the capital structure of the company.

Many businesses are treating the current low demand as the “new future” NuStar has joined that trend. 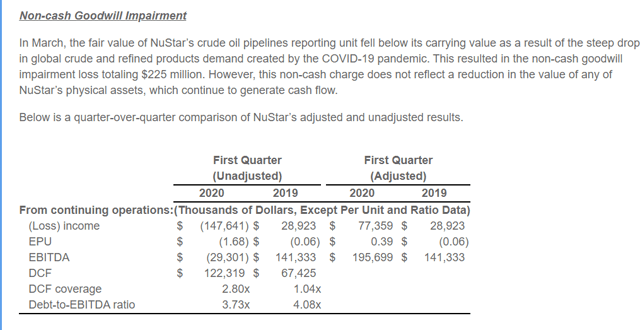 The noncash charge reflects an updated more conservative future outlook due to the uncertainties of the coronavirus challenges. It should be noted that this charge is probably a win-win situation. Management has an excuse to “dump” some noncash charges into the current report. Since the market already expects some negative comparisons (to say the least!), the reporting of an impairment charge is unlikely to affect the price of any of the securities that much.

The second quarter had probably the weakest operating results of the fiscal year. Therefore “financial housecleaning (which means a fair amount of impairments)” should be the norm throughout the industry in the first half. Some companies may wait until the end of the fiscal year to announce non-cash charges. But right now the trend appears to be to take impairments when the operating results are weak.

Further more management will be reporting “better” profits during the recovery due to the lack of costs that have now been impaired. Pipelines rarely suffer a permanent loss of income. But the argument for an impairment at the current time typically meets little resistance. Therefore when income recovers (as I anticipate) there will be less costs to offset that income. In this case the most likely place these lower costs will show is in future depreciation costs.

As shown above, recurring EBITDA (as defined by management) is up nicely compared to the year before. The emphasis on debt repayment should ensure that there are no financial pressures whatsoever during this coronavirus period. Second quarter is probably going to be the worst quarter of the fiscal year for many companies including this one. But the recovery will likely be more unpredictable than many in the past. That could lead to a lot of market volatility in the near future. 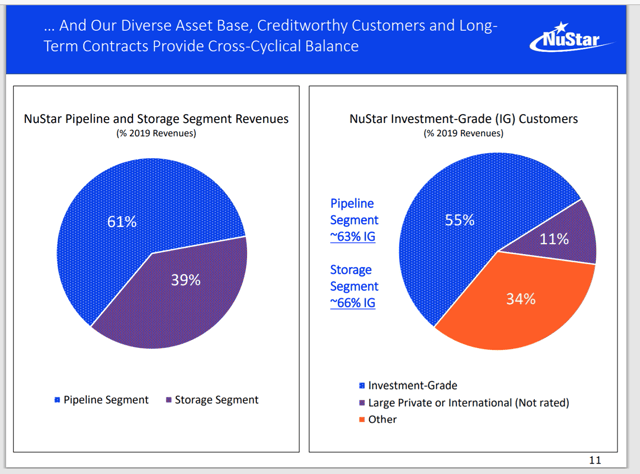 A conservative debt structure is indicated as the investment grade customers shown above are a little on the low side in the current situation. Now offsetting that is an excellent Permian location that should provide some cushion as the coronavirus challenges unfold.

The presence of the preferred stock does make the common stock a little more risky than the ratings of the debt would indicate. This may be another reason to invest in the preferred at the current time.

This company has a foothold in the export import business. Shown below is the situation at one of the main industry exporting points in the United States. 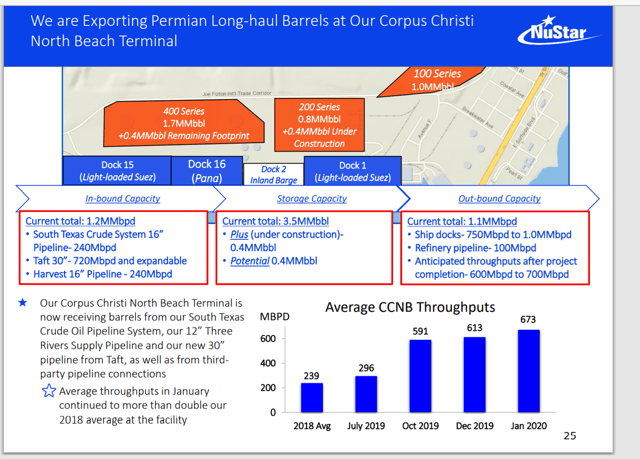 This partnership has the advantage of “being there first”. Because of this location, the partnership has an outside chance of becoming a takeover candidate in the future. The export and import business as well as the Permian business are two very premium businesses that one seldom sees together in one partnership. 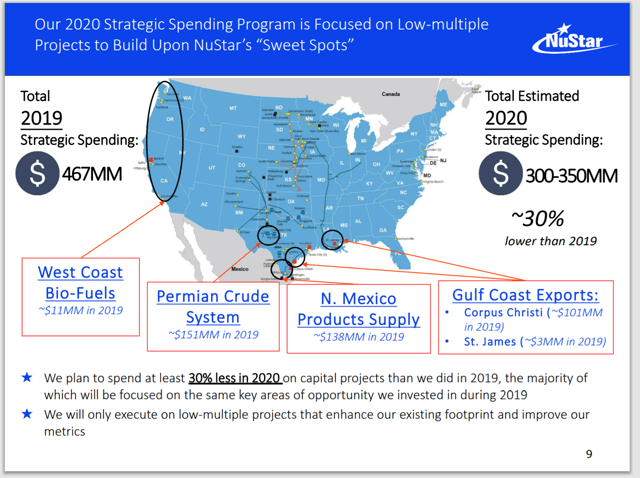 The storage business will obviously benefit from the current situation. However it should be noted that the combination of storage, transportation, and the involvement in biofuels is probably a little more volatile than the current midstream.

Note that the common unit payment history appears to be “going the wrong way”. 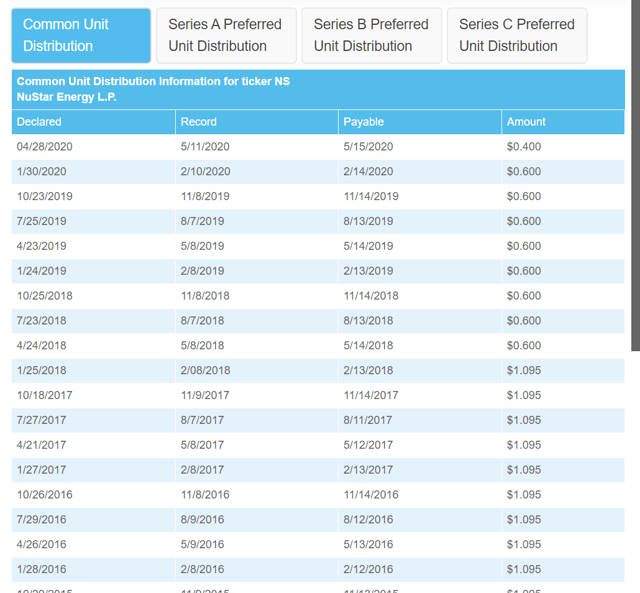 Nustar issues a K-1 which may not be a popular choice for some. The payment reductions have put the company in an excellent situation to reduce financial leverage.

The common unit holders probably hope that the management also repurchases some preferred at a discount. So far management has not indicated any intentions to do so. Nonetheless, the debt reduction priority is a welcome priority in the current environment.

The preservation of balance sheet strength is important as it should allow for a faster recovery once the current challenges fade into the past. That could take a year or more for the challenges to completely fade. This virus has been unpredictable from the beginning. Historically, a recovery would move a lot faster than this. So we are definitely in new territory. That makes Mr. Market nervous and hence Mr. Market will value future forecasts at a lower price-earnings ratio.

I analyze oil and gas companies and related companies like NuStar Energy LP in my service, Oil & Gas Value Research, where I look for undervalued names in the oil and gas space. I break down everything you need to know about these companies — the balance sheet, competitive position and development prospects. This article is an example of what I do. But for Oil & Gas Value Research members, they get it first and they get analysis on some companies that is not published on the free site. Interested? Sign up here for a free two-week trial.

Disclosure: I/we have no positions in any stocks mentioned, but may initiate a long position in nu over the next 72 hours. I wrote this article myself, and it expresses my own opinions. I am not receiving compensation for it (other than from Seeking Alpha). I have no business relationship with any company whose stock is mentioned in this article.