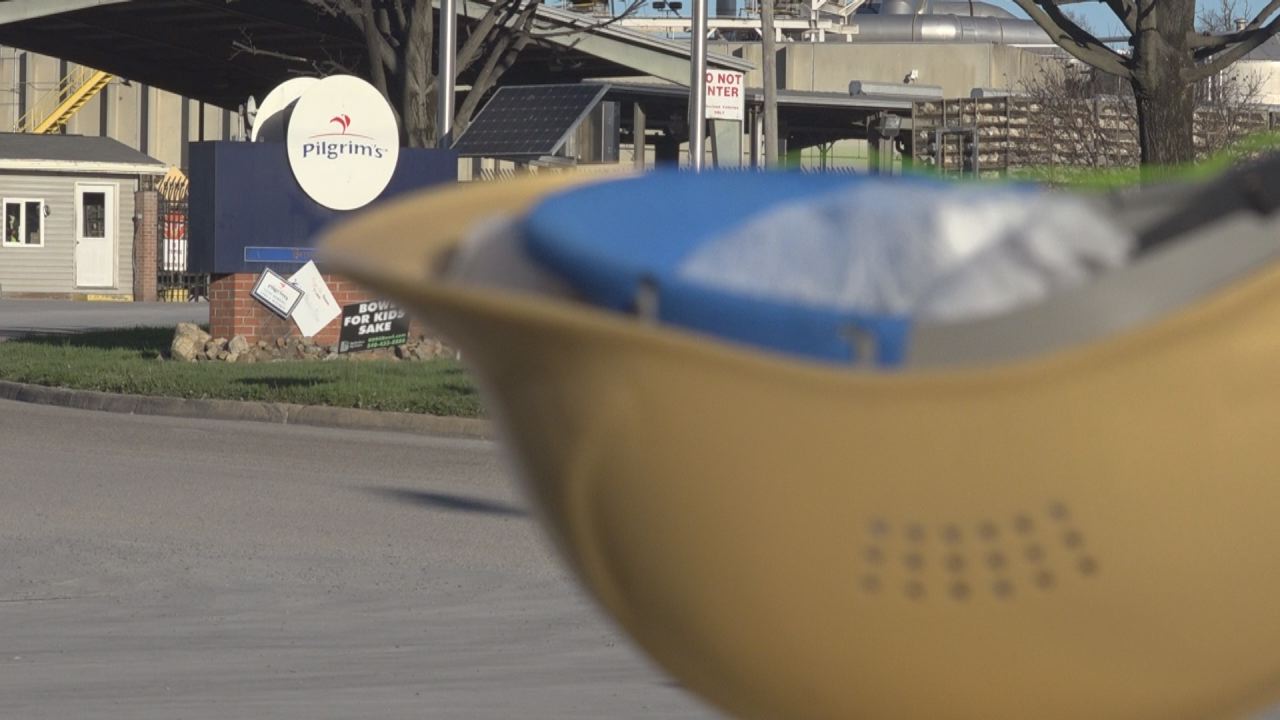 Pilgrim’s Pride (PPC) is a leading chicken producer that has been around for quite a while. The company has recently leveraged its balance sheet for the acquisition of Moy Park. Although this acquisition represents a wise strategy to expand its production from chicken to pork while expanding operations globally, its current approach should be aimed at reducing its debt to lighten its balance sheet, but far from that, the company later acquired Tulip Limited, another company dedicated to pork production in the United Kingdom, getting further into debt. Although these acquisitions are very smart strategic moves and their debt is still manageable, investors remain skeptical of the management’s ability to recognize that being conservative by paying down debt is best for the company in the long run. This skepticism is not a coincidence, since the company already had to file for bankruptcy in December 2008 because of a leveraged balance sheet that didn’t give them enough room to maneuver during the financial crisis. Currently, the company trades at a discount of 60.61% from all-time highs, representing a good opportunity to buy shares, but this comes at an increased risk. If a new headwind hits the company, it may enter into a spiral of misfortunes with little room to navigate it.

A brief description of the company 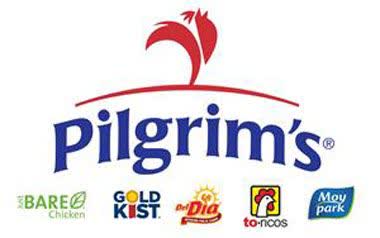 Pilgrim’s Pride is a meat processing company founded in 1946 in Texas, mainly focused on chicken and, more recently, pork. It employs 38,000 workers all over the world in 171 owned facilities and 26 leased. The company has an impressive production capacity, being able to produce 3.3 billion eggs annually, 511.70 tons of prepared food a year, and 8.7 million birds every day. In addition, the company has started producing pork, with a capacity of 9,800 pigs per day and 73.54 tons of prepared pork products a year. The Brazilian company JBS S.A. (OTCQX:JBSAY) owns a stake of 79.5% of the company.

Expansion To The European Market and… Pork!

In September 2017, Pilgrim’s announced the completion of Moy Park’s acquisition for $1.3 billion. Moy Park is an Irish poultry meat producer founded in 1943 that operates mostly in Europe. It is the leading producer in Northern Ireland. This acquisition represents a huge opportunity to increase the company’s presence in Europe since it is well-diversified itself. Moy Park is the meat provider for many branded products, but also store brands from different supermarkets and retail chains across Europe, such as Tesco and Ocado (United Kingdom), Supervalu and Dunnes Stores (Ireland), Eurospar, Spar, among others. In that sense, there is nothing to fear from the everlasting war between private labels and national brands, since Moy Park produces meat for both options. Also, Moy Park is a very known food service provider.

Later, in October 2019, Pilgrim’s confirmed the completion of the acquisition of Tulip Limited for $354m. This deal represents a new milestone in the expansion into new markets. In this case, we are talking about a pork food producer that is based in the UK, but exports over 60,000 tonnes of pork products worldwide every year in the form of fresh pork, sausages, bacon, canned food, gammon, and snacks. It was founded in 1958, so it is well established. They are also a major supplier to retail chains and supermarkets, providing their meat products to be sold under over 4,700 retail own labels. They also own their own portfolio of brands, selling their products under brands such as Danepak, Tulip, Adams, Cherry Tree Farm, Spam, Skippy and Stagg Chilli.

On December 8, 2011, the company issued 44.4M shares at a price of $4.50 with the aim of improving its structure. Since then, the company has been trying to slowly buy back these shares. Below, I will calculate what buyback yield has the company been giving back to investors.

Since 2014, the company has been successfully decreasing its number of shares outstanding, especially in the period 2015-2016 and very recently. In the Q2 ’20, the company reported 244,031,578 shares outstanding as of July 29. This represents a reduction of 2.22% from 2019. This confirms the commitment of the company to continue rewarding shareholders via share buybacks. During 2015 and 2016, the share price had been trading at a 30-50% discount from December 2014, so the timing from these buybacks was very successful. In 2020, we are starting to see the same trend: a 30-50% discount from December 2019, and an abrupt decrease in shares outstanding.

A high debt to digest, accompanied by great growth

The company has been leveraging fast since 2016, more than doubling its debt load in 4 years. This is explained by the Moy Park major acquisition in 2017, which took $1.3 billion to complete. With a ~11-12% gross profit margin, Moy Park will give a boost in free cash flow to the balance sheet, which would help it to deleverage faster to digest the acquisition, a process that will likely take about 5 years if the company begins to use its remaining resources (free cash flow to firm) to pay down debt. Anyway, the acquisition of Tulip Limited for $354 million has also been added to the queue of acquisitions to digest.

The problem comes from the gross profit margin, which is low at the moment. The company is a cyclical one and feeding costs are determinants when it comes to the company’s ability to turn profits into actual money. But an even more important factor to consider when assessing whether acquisitions have been worthwhile is sales, which have increased at a brisk pace in recent years.

Looking at the company’s net sales, we can see a 32.92% increase from 2014 to 2019. This is a very nice increase, but it has been achieved at the expense of increased leverage. The bad news is the company refuses to accept that it has excess debt, so I do not expect that in the short term they will start working on it.

Our leverage remains at a manageable level, and we expect to continue to produce positive cash flow this year, increasing our financial capability to pursue strategic actions. We expect 2020 interest expenses of around $130 million to $140 million.

This is a red flag, but it doesn’t stop me from digging even further, as ~60% share price drops always come with risks of this equivalence. So, I’m going to try to assess the current situation to see the company’s ability to turn things around.

The share price dropped 5.24% on 30th July, after the Q2 ’20 results were released. Since then, the stock has continued slipping slightly until today. 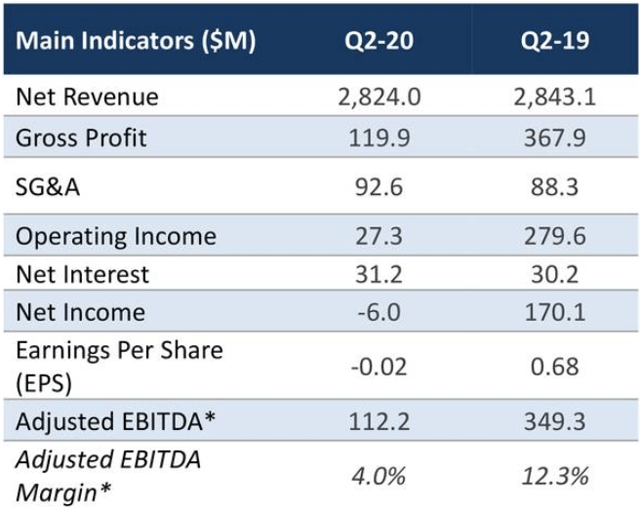 Net revenue dropped 0.67% to $2.82 billion, which is not a bad number considering we are in the midst of a global pandemic. In fact, Tyson Foods (TSN) saw an 8.0% decline in revenues. In June 2020, the US and Mexico maintained its performance in line in a year over year basis, while Europe improved slightly. This is a sign that the third quarter will be substantially better than this one if a second wave doesn’t make lockdowns mandatory around the world. Foodservice was harshly hit during the second quarter as a consequence of the confinement measures and the paralysis of the tourist sector worldwide. This hard hit was partly mitigated by a 205% increase in online sales.

The segments that showed the biggest growth was the Philippines (+45%) Vietnam (+19%) and Taiwan (+9%). This has helped the company to increase exports by 12% and export revenues by 15% year over year, increasing its presence internationally. Mexico also outperformed expectations in its prepared food segment due to stockpiling. From here, it looks like Pilgrim’s is going to be, progressively, a global leader with more presence globally. EBITDA, on the other hand, is expected to increase in the long term thanks to the synergies created by the integration of new operations in Europe. The foodservice segment started to recover at the end of the quarter as restaurants have started to reopen, a trend that will consolidate during the third quarter.

With a mix of high debt, higher feeding costs, and the loss of purchasing power of the population as a consequence of the 2007-2008 financial crisis, the company was forced to file for bankruptcy in December 2008. 12 years passed since then, and the company has been doing relatively well. That explains the 36% drop since February 20 until March 16. The importance of taking this into account is the fact that remembering this past event helps us identify those aspects of the company that deserve more careful analysis and monitoring. From here, it is mandatory for Pilgrim’s Pride to address debt and pay it down, since the present is slowly getting to a point where some similarities can be identified. Still, I think the company has done a good job over the years, diversifying its product portfolio and expanding its borders outside the national territory, making the current position a very different one since they filed for bankruptcy 12 years ago.

The foodservice segment could get a second hard hit if a second wave of the coronavirus pandemic forces the governments of the countries where Pilgrim’s operates to mandate lockdowns for the second time. This may send the share price to new lows, and would likely make recovery a much longer and risky road since the company is already overleveraged. This risk should not be ignored, as we must remember that the company’s balance sheet is a little weak at the moment.

Pilgrim’s Pride is a company that has been operating for 74 years, but this fact doesn’t guarantee its viability in any case, especially after the company filed for bankruptcy 12 years ago. Currently, the situation is much better than then regarding diversification and internationalization.

I would not consider Pilgrim’s Pride a core position in any stock portfolio due to its cyclical nature, low gross margins, and a lack of dividend payments, but I have to admit that the company currently represents a good opportunity to buy some shares for the medium term, always with an exit plan once things return to normality and the price gets near all-time highs. That’s why I would give the company a buy rating, but I would sell (or at least look over) once the price enters the $25-30 range. I believe share buybacks will keep going while the price is depressed, at the expense of remaining leveraged, although I would honestly sleep better if the company decided to use that money to pay down debt. However, if the share price increases in the mid-term, the company could reissue the repurchased shares at a higher price, making a nice profit along the way. It will take time for things to go back to normal for the company, but I believe that it has ample resources to get ahead and investors with risk tolerance will be greatly rewarded, since I really believe that it is fear and the cyclical nature of the business that have caused shareholders to withdraw, and not such catastrophic results.

The Impact Of ETFs On Market Efficiency