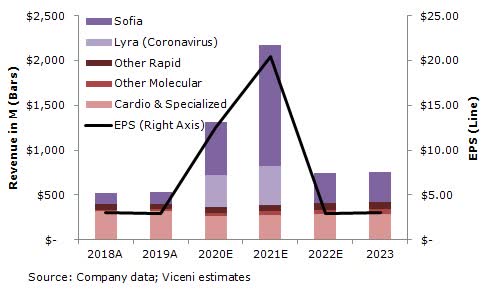 This article was selected to be shared with PRO subscribers, who also got 7 days’ exclusive access to Viceni Investing’s original Top Idea on Quidel (NASDAQ:QDEL). Viceni Investing is an individual investor and retired sell-side analyst rated top 10 by Institutional Investor magazine. Find out more about PRO here.

Seeking Alpha: Can you briefly summarize your bearish thesis?

Viceni Investing: QDEL was the first to market with a rapid coronavirus diagnostic test, which is much like the rapid flu test you might get at a walk-in clinic during flu season. As long as the pandemic persists, I expect QDEL to sell as many of these tests as it can manufacture. However, the stock seems to be pricing in a relatively high probability (I estimate ~25%) that pandemic-level earnings will persist for a long time. In reality, I expect a vaccine to be approved by the FDA quite soon – possibly by the end of this year. I am saying that there’s a <1% chance that a vaccine won’t be approved by the end of 2021. Realistically, if a vaccine is approved soon, a good proportion of the U.S. population will have received it by mid-2021, which will start to negate the need for diagnostic tests. QDEL’s earnings would decline off the pandemic-driven peak (there isn’t really anything else that could make up the slack).

The trickiest thing about this short is the timing. I’ve been waiting to publish this article for about 6 weeks. Revenue and earnings are going to continue to climb in the near-term (possibly by a lot), but I am recommending shorting now because I expect vaccine news to take center stage sometime in Q3. Also, even though QDEL posted a blow-out Q2 and gave materially above-consensus guidance for Q3, the stock price reaction was somewhat muted, suggesting to me that most of the upside expectations are priced in.

SA: You made a great point with the hockey metaphor as it applies to the potential for a vaccine – can you recap this for readers and discuss how it applies to not only QDEL but other stocks/industries?

Viceni Investing: You may have read things in the media about how new vaccines can take as long as a decade to develop. But I want readers to understand there is a lot of unprecedented stuff happening simultaneously right now. First, there are about 200 vaccines in the pipeline (unprecedented). Second, drug companies are taking multiple technological approaches, some of which weren’t technologically possible 10 years ago (unprecedented). Third, we’ve got a handful of companies already in Phase III trials after 4 months (unprecedented). Fourth, the U.S. government has already reserved doses for delivery this year. And fifth, the virus itself has a lot more in common with diseases we’ve conquered than with diseases we haven’t conquered.

The hockey metaphor is this: With nearly 200 shots on goal, it would be more surprising if none makes it into the net, especially since many of the players have deep experience, they are taking shots from many different positions on the ice at once, several have advanced quite close to the net, and they are using the most up-to-date offensive strategies against a well-understood goalie. The chance of a goal in this game is very high.

Looking beyond QDEL, I don’t think the broader market is mispricing the likelihood of a vaccine quite as much. S&P 500 earnings estimates suggest 2021 EPS will fully rebound to 2019 levels, and the market is trading at 20x that estimate. That’s a 5% earnings yield, or a spread of over 400 bps versus the 10-year. That’s totally reasonable, and it’s consistent with what I’ve been predicting since March, which I wrote up in this article.

Digging into other specific stocks, I think we have to differentiate between trends that will “get back to normal” when a vaccine is distributed and trends that might not revert. For instance, work-from-home might be something that continues after the pandemic for other reasons. The same might be said for the surge in e-commerce. But I think it’s entirely possible that overall defaults end up being below the level banks are reserving for, so I’ve begun nibbling on positions in money center banks. I’ve taken a starter position in DAL on the thesis that flying will be more viable when a vaccine arrives and that DAL is one of the strongest companies in an industry that will be thinned out. I’ve also participated in some of the stronger casual dining restaurant names on a similar thesis, such as DRI (though this one has already worked to some degree).

SA: Can you walk readers through the asymmetry here, especially as there appear to be multiple dimensions to this?

Viceni Investing: QDEL’s run-up has been supported almost entirely by this first-to-market rapid antigen test. I don’t want to diminish Quidel’s accomplishment – personally, I am very glad they got this to market so quickly, and I think management is doing an effective job. The company rightfully has the support of a number of high-placed voices. But on the flip side, there are multiple factors that make this a good short. First, of course, is the vaccine. But there is also competition on the market at this point (Becton Dickinson and Abbott) and more likely on the way. It’s possible that we as a society get more serious about social distancing and mask wearing during this second wave, which removes some of the impetus for testing. And it’s possible that QDEL simply overbuilds its capacity for a temporary situation. If they both fully scale up, Quidel and Becton alone will produce enough tests for every U.S. citizen to have one per year. Unless you can envision every U.S. citizen getting multiple coronavirus diagnostic tests per year for multiple years into the future, the valuation doesn’t make sense to me.

SA: What’s your take on the recent earnings and how does this impact the thesis?

Viceni Investing: We learned several important things on the earnings call. On the positive side for Quidel, we learned the company’s revenue per antigen test is on the high end of the $15-20 range I estimated, which is giving them more revenue and gross profit than I was modeling. They’ve also managed to keep operating costs in check, so their margins are going to be very high during this pandemic spike. As anticipated, they are selling as many antigen tests as they can manufacture right now. On the negative side for Quidel, they aren’t selling as many Lyra tests as they can manufacture. We learned they are going to be doing quite a bit of work to vertically integrate their supply chain and ramp production/distribution. They may get some government grant money to help with this, but I see some risk that they are going to be stuck with a lot of unused capacity after the pandemic passes, which could impair margins.

The most important thing to me was that despite a very strong Q2 with great margins, and despite very good guidance for Q3, the stock was up only ~4% on the day after earnings. So it seems to me that a lot of the good news is priced in.

Thanks to Viceni Investing for the interview.

Disclosure: I am/we are short QDEL. I wrote this article myself, and it expresses my own opinions. I am not receiving compensation for it (other than from Seeking Alpha). I have no business relationship with any company whose stock is mentioned in this article.

The One Metric All High-Yield Investors Should Know