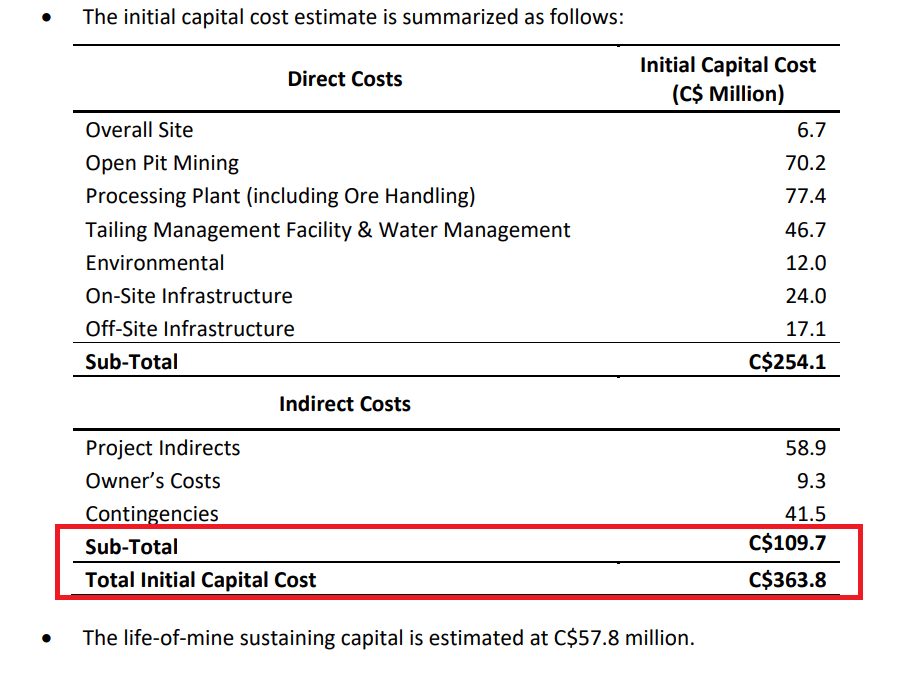 We’ve seen a surge in speculative activity among the gold juniors (GDXJ) over the past few months, with more than thirty names up over 150% year to date. The most recent name to attract retail investors’ capital is Spanish Mountain Gold (OTCPK:SPAZF). The junior miner is exploring for gold at its Spanish Mountain Gold Project in British Columbia, Canada, and the stock that couldn’t find any buying interest in years is now up 480% year to date, with a 400% advance in the past 20 trading days. While this incredible share price performance might be luring some investors into thinking that this is a world-class project, I would argue the opposite. This is because the project has one of the worst After-Tax NPV (5%)-to-Initial Capex ratios among small- to mid-scale gold development projects at barely 1.20. Based on the inferior metrics relative to peers at a conservative $1,450/oz gold price, and a hefty capex bill for a small-scale project, I believe investors would be wise not to chase the stock above US$0.40. All figures are in US dollars unless otherwise noted. 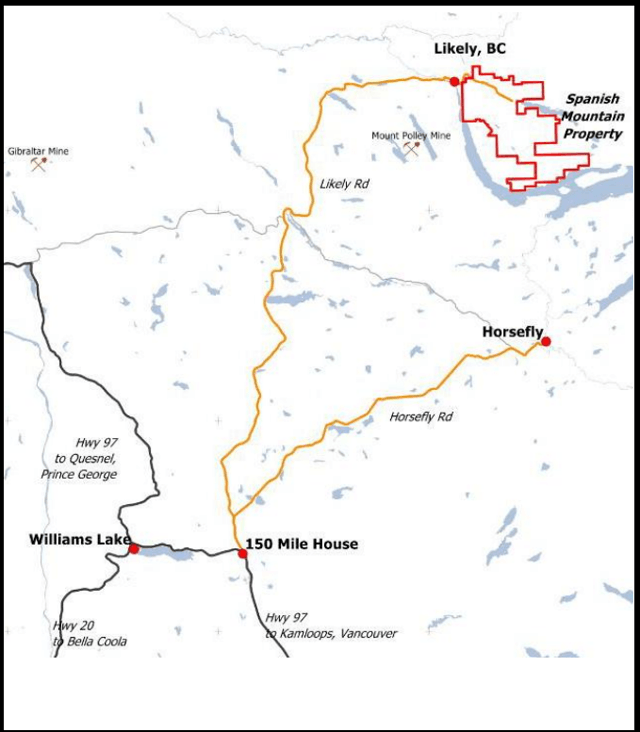 As noted above, it’s been an exceptional year for the gold junior sector, and the market is finally noticing several world-class juniors. However, the most recent rally in the sector has been led by the less-exceptional projects and the stocks that haven’t been able to find a meaningful bid under their share price for years. Often when the dogs start running, it’s a sign that the rally among the juniors might be a little long in the tooth, and Spanish Mountain’s economics suggest that stock is hardly a thoroughbred. The company released a Preliminary Economic Assessment last year (PEA) on its Spanish Mountain Gold Project in British Columbia, and while the results weren’t bad, they weren’t anything special. Let’s take a closer look below: 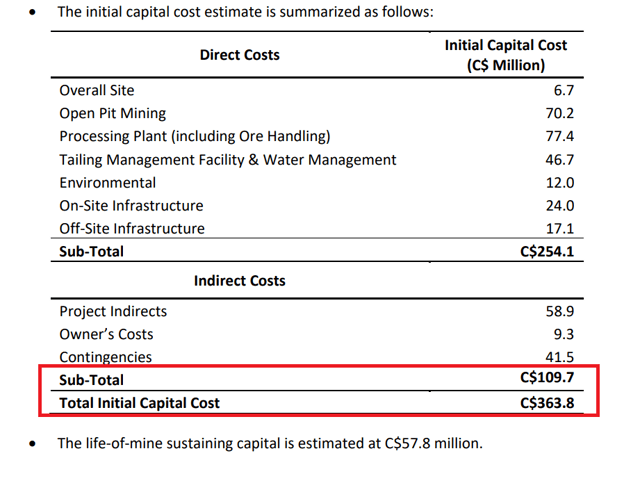 The Spanish Mountain Gold Project PEA envisions a low-cost open-pit mine with an 11-year mine life and average annual gold production of 104,000 ounces of gold. The projected all-in sustaining costs are exceptional at just $549/oz, but the initial capital expenditures leave a lot to be desired. Typically, small-scale gold projects with a 100,000-ounce per annum to 200,000-ounce per annum production profile carry an average initial capex of $182 million (based on 15 projects below). Spanish Mountain’s upfront capital comes in at a whopping $273 million. This is 50% above the average initial capex for a project of this size, and a tough capex bill to manage for a junior miner. We can take a closer look at this in the chart below:

As we can see in the chart above, Spanish Mountain’s initial capex of $273 million (far right) is not too out of the ordinary, as there are three other projects with initial capex above $275 million (Magino, Back River, Castle Mountain). However, the difference is that these three projects have an average production profile of 162,300 ounces per year. Meanwhile, Spanish Mountain’s average annual gold production is expected to come in at just 104,000 ounces per year. If we look at the whole peer group, the average annual gold production profile and initial capex for the 15 peers is 134,000 ounces of gold per year and a $182 million initial capex bill. Despite Spanish Mountain having a capex bill 50% higher than the average at $273 million, its annual production profile is almost 30% lower at just 104,000 ounces. Therefore, Spanish Mountain is a costly project to get up and running, especially since it’s relatively small compared to most gold development projects. This is likely why the stock was left for dead for years, as the project is nothing special relative to most projects in the sector.

If we take a look at the project from a financial standpoint, things are even more dreary on a relative basis. As the above table shows, the After-Tax NPV (5%) for Spanish Mountain is C$443 million (US$332 million) at a conservative gold price of $1,450/oz. This figure improves to C$609 million (US$457 million) at an upside case of $1,700/oz gold. These are respectable economics and are not bad by any means, but when measured against the hefty capex bill, they provide a very low After-Tax NPV (5%)-to-Initial Capex ratio of just 1.22.

This is nearly 50% below the average for small and mid-scale development stage projects of 2.14 when all projects are measured against a conservative $1,450/oz gold price. Meanwhile, most projects improve to an After-Tax NPV (5%)-to-Initial Capex ratio of above 3.0 at $1,700/oz gold, but Spanish Mountain’s project moves to just 1.67. This shows that Spanish Mountain has a 20% lower After-Tax NPV (5%)-to-Initial Capex ratio (1.67 vs. 2.14) at $1,700/oz gold even when measured against projects with studies using a $1,450/oz gold price. Therefore, while this is not to conclude that Spanish Mountain isn’t a satisfactory project that can make money, it does show that it doesn’t stack up well at all against other projects.

As the chart above shows, Spanish Mountain has the worst ratio for After-Tax NPV (5%)-to-Initial Capex among 15 projects worldwide, and it’s not even close when it comes to how inferior the project is. The second-least impressive is Rockhaven’s (OTC:RKHNF) Klaza Project, which comes in at 1.55, a ratio that is more than 20% higher than Spanish Mountain’s ratio of 1.22, and Klaza is nothing to write home about either. Therefore, while there’s tons of hype surrounding Spanish Mountain, it’s worth noting that while the low projected costs are great, the cost to generate each dollar of After-Tax NPV (5%) is quite low. This is because the capex bill is quite high for a small-scale project. It’s always better to have modest upfront capital for a smaller junior, as there’s no easy way to fund a $273 million capex bill as a company with a sub-$150 million market cap. Typically, this would require massive share dilution and debt, as well as a stream on the project to generate additional capital.

To compare Spanish Mountain to another project with a similar-sized resource, Skeena Resources (OTCQX:SKREF) completed a PEA last year in British Columbia, but the company’s project envisions upfront capital of just $233 million to build a mine capable of producing over 300,000 gold-equivalent ounces per year. All-in sustaining costs are quite similar to Skeena’s, projected at $615/oz, but the initial capital is significantly lower. Therefore, from a comparative standpoint, Skeena can build a 300,000-ounce per year mine for 14% less ($233 million vs. $273 million) than Spanish Mountain can build a 104,000-ounce per year mine in the same province. This does not mean that Spanish Mountain won’t be built, as many sub-par gold projects will go into production if gold prices remain high, but it does suggest that there is absolutely nothing special about Spanish Mountain. 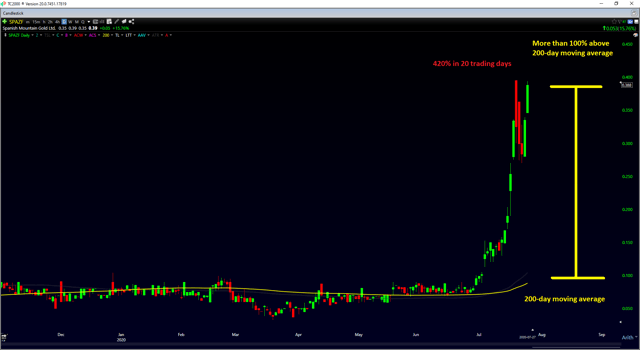 Despite these inferior economics, Spanish Mountain Gold is up 420% in 20 trading days and is now trading more than 100% above its 200-day moving average, as shown in the chart above. This is quite a risky area to be establishing new positions, and typically, stocks are prone to sharp corrections when they get this extended. Therefore, given that Spanish Mountain has an inferior project and is now one of the most extended gold juniors in the sector, I believe investors would be wise to be cautious at current levels. While short-term momentum may carry Spanish Mountain a little here, I see an extremely unfavorable reward-to-risk for buying new positions above US$0.40. 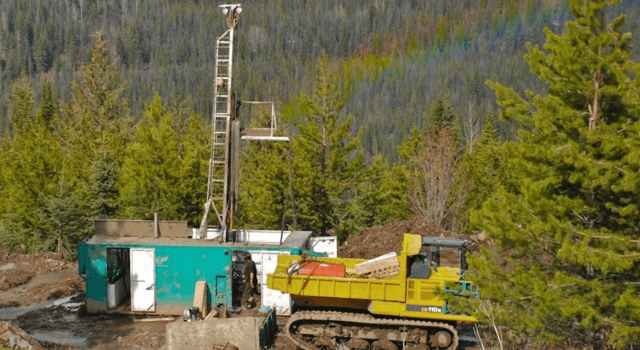 Spanish Mountain has caught the eyes of the junior mining community as most high-flyers do, but it’s essential to separate the high-flyers with world-class projects from the high-flyers with sub-par projects. In Spanish Mountain’s case, I would argue that the 480% year-to-date return is getting pretty frothy, especially considering that it is not a world-class project that majors are salivating over. This is corroborated by the fact that the stock went nowhere for years until it started getting promoted recently, yet all of the juniors with world-class projects have been in steady uptrends since 2017. This is because big money saw their long-term potential and accumulated them since 2016 when gold finally woke back up. Based on Spanish Mountain having inferior economics to peers and one of the most overbought charts in the sector, I see no reason to chase the stock here. Instead, I prefer mispriced juniors like Integra Resources (OTCQX:IRRZD) with higher production profiles and 40% less capex to move into production.

Disclosure: I am/we are long GLD, SKREF, IRRZF. I wrote this article myself, and it expresses my own opinions. I am not receiving compensation for it (other than from Seeking Alpha). I have no business relationship with any company whose stock is mentioned in this article.

Additional disclosure: Disclaimer: Taylor Dart is not a Registered Investment Advisor or Financial Planner. This writing is for informational purposes only. It does not constitute an offer to sell, a solicitation to buy, or a recommendation regarding any securities transaction. The information contained in this writing should not be construed as financial or investment advice on any subject matter. Taylor Dart expressly disclaims all liability in respect to actions taken based on any or all of the information on this writing.