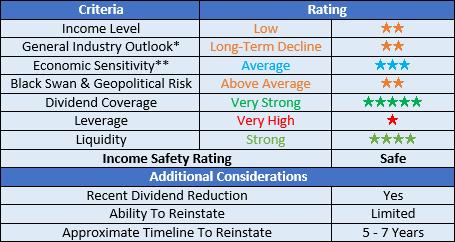 When turmoil struck earlier this year, Targa Resources (TRGP) almost completely annihilated its dividend with an 89% reduction, which now only provides a yield around 2%. Investors who purchased Targa’s shares seeking its once-high dividend yield around one year ago are likely quite disappointed and unfortunately, it appears that they face many years of waiting before seeing their desired dividends again.

Since many readers are likely short on time, the table below provides a very brief executive summary and ratings for the primary criteria that was assessed. The following sections all provide further detailed analysis for those readers who are wishing to dig deeper into their situation. 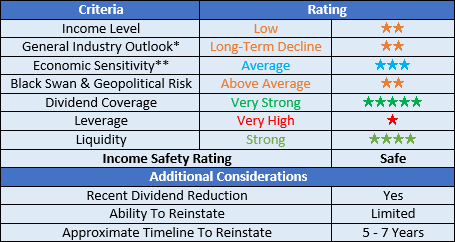 *There are significant short and medium-term uncertainties for the broader oil and gas industry, however, in the long term they will certainly face a decline as the world moves away from fossil fuels.

**Whilst the oil and gas industry to which they service has high economic sensitivity, given the more stable nature of the midstream sub-industry this was deemed to be average.

Recently, I have taken actions to make my analysis more comparable between different companies and partnerships by introducing a more standardized rating system. A list of all my equivalent ratings as well as more information regarding my rating system can be found in the following Google Document. Whilst the list is only small at the moment, please check back across time since it will continue growing in tandem as my coverage continues growing. 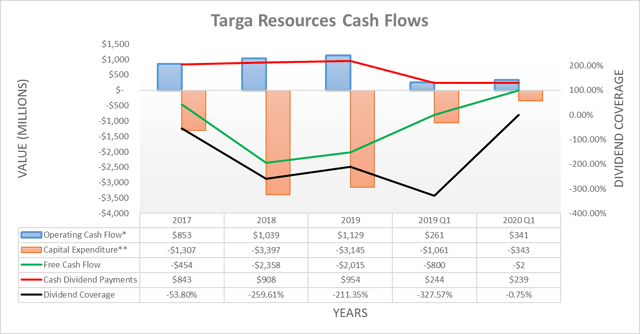 Instead of simply assessing dividend coverage through distributable cash flow, I prefer to utilize free cash flow since it provides the toughest criteria and best captures the true impact to their financial position. The main difference between the two is that the former ignores the capital expenditure that relates to growth projects, which given the very high capital intensity of their industry can create a material difference.

Upon reviewing Targa’s cash flow performance during 2017-2019, the reasoning behind its decision to reduce its dividend quickly becomes apparent. Targa’s very high capital expenditure left its free cash flow well into negative levels and thus the entirety of its dividend payments were funded through debt, which was the first early warning sign that they were vulnerable to any downturn. Since this now sits in the rear-view mirror, Targa’s future cash flow performance is considerably more important.

Whilst Targa’s previous dividend was quite costly at $954m for 2019, this obviously will no longer be the case going forward. Based upon Targa’s latest outstanding share count of 233,116,228, its new quarterly dividend of $0.10 per share will only cost them $93m per annum. Throughout 2020, they are providing guidance for growth capital expenditure of $750m at the midpoint plus a further $130m of maintenance capital expenditure, as per slide nine of its first quarter of 2020 results presentation. Considering this represents a massive reduction of 73.10% compared to Targa’s average capital expenditure for 2018-2019, it stands to reason that this will significantly crimp its future growth, which is admittedly prudent given the especially uncertain economic outlook.

Under this middle of the road scenario, Targa would have $217m of free cash flow remaining after dividend payments and thus available for deleveraging. Whilst Targa’s operating cash flow saw a significant increase year on year during the first quarter of 2020, this was largely due to temporarily favorable downstream gross margins, as per slide six of its previously linked first quarter of 2020 results presentation. 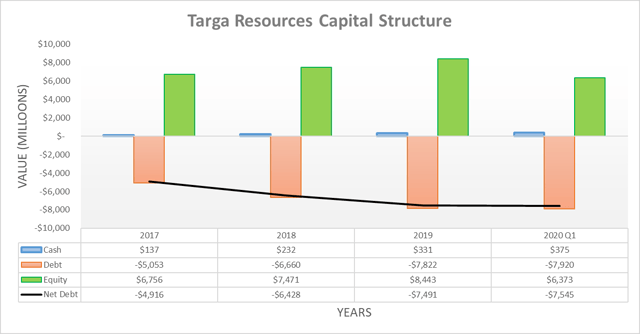 Since Targa has always funded its dividend payments through debt, it was not surprising to see that its capital structure has continued to have net debt increase. Targa’s large $2.443b of impairments during the first quarter of 2020 demolished a material portion of its equity. Although this is already not a positive situation, however, Targa’s leverage will ultimately determine whether they can afford to continue bridging the cash shortfall for its dividend payments with debt. 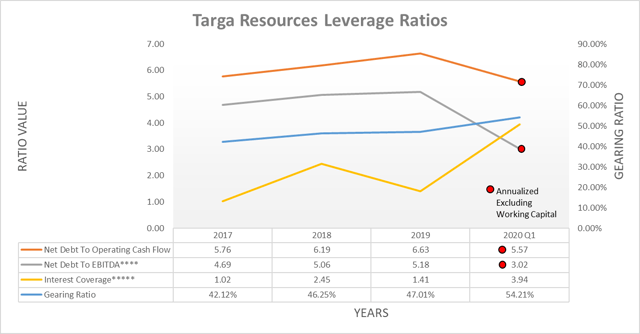 These financial metrics show that Targa entered this downturn completely unprepared and vulnerable with very high leverage, as primarily evidenced by its net debt-to-EBITDA of 5.18 and interest coverage of only 1.41 at the end of 2019. The maximum level for Targa’s net debt-to-EBITDA to consider its leverage only moderate would be under 3.50, with anything above 5.00 being considered very high. This was the second early warning sign that Targa’s dividend was a particularly risky option for dividend investors.

Whilst Targa’s net debt-to-EBITDA decreased significantly to only 3.02 during the first quarter of 2020, this was an anomaly stemming from its temporarily high downstream gross margins. When Targa’s midpoint adjusted EBITDA guidance of $1.513b for 2020 is combined with its net debt of $7.545b, it produces a net debt-to-EBITDA of 4.99 and thus is still right at the crux between high and very high leverage.

It stands to reason that until Targa’s leverage is reduced they cannot begin thriving as the dividend investment that they once represented. This would entail them reinstating its former dividend, assuming that its free cash flow in the future even provides adequate coverage. Whilst investors can debate what would be a sufficient level of deleveraging, I believe that restoring Targa’s net debt-to-EBITDA of 3.50 is an appropriate middle of the road level that would leave them at the crux between moderate and high leverage. Based upon Targa’s midpoint adjusted EBITDA guidance for 2020 of $1.513b, this would require them to reduce Targa’s net debt down to $5.30b, but this was rounded up to $6b in order to be generous by accounting for possible returns from its remaining growth capital expenditure.

This scenario would require the company to reduce its net debt by $1.545b from its current level of $7.545b, which would take them around seven years if they were to continue generating $217m of free cash flow after dividend payments. Even if this were to be reduced to five years due to the possibility of further earnings growth, then Targa’s ability to reinstate its former dividend is still limited and thus leaves them unattractive for dividend investors who face a drawn-out wait ahead. 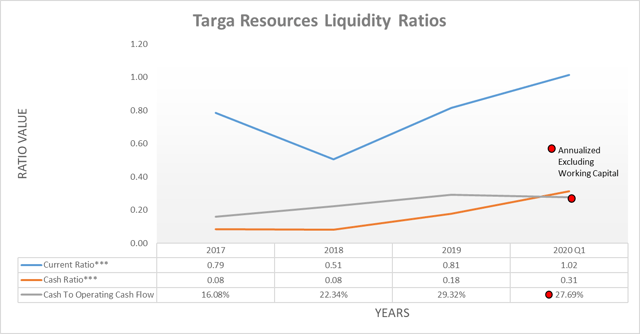 Even though the company has very high leverage, thankfully, its liquidity is strong and thus they are quite likely to at least survive this downturn despite limited prospects to thrive anytime soon. Targa’s current and cash ratios of 1.02 and 0.31 respectively are both adequate, however, its prospects to generate free cash flow after dividend payments going forward cements its liquidity at a strong level. This largely removes Targa’s reliance on credit facilities, which is desirable and helps keep them self-funding.

Since the company does not face any material debt maturities until May 2023, it provides them with a degree of breathing room to either repay or refinance its debt. Providing Targa continues producing free cash flow and its leverage trends lower, it would be reasonable to expect that debt markets will be supportive to allow refinancing as required. Although this also further illustrates another reason that Targa’s prospects to reinstate its former dividend are significantly reduced throughout this time period. 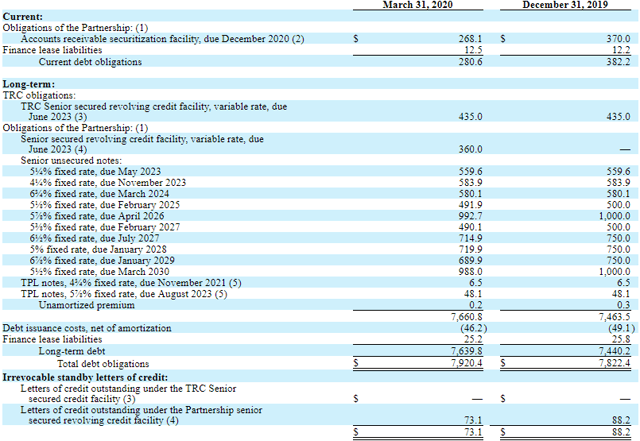 When all is said and done, Targa is offering investors a low dividend yield whilst they await what appears to be five or more years of a drawn-out deleveraging process. Whilst this may be sufficient to entice some dividend investors, I am certainly not one and thus I believe a neutral rating is appropriate. If it were not for Targa’s strong liquidity, this rating would have been bearish due to the additional risks posed by its very high leverage.

Notes: Unless specified otherwise, all figures in this article were taken from Targa Resources’ Q1 2020 10-Q (previously linked), 2019 10-K and 2017 10-K SEC Filings, all calculated figures were performed by the author.

Immunomedics Positive Cancer Data, And Other News: The Good, Bad And Ugly Of Biopharma

A New CEO Sets Up Wrap Technologies For Strong Growth