It’s always nice to be able to say something positive about a company once in a while. Despite having garnered a bearish reputation with my past coverage of Tesla (TSLA), I make it a point to try and point out both the positives and negatives of any given stock.

As you can see in the following charts, Tesla did a very good job during a very difficult quarter to get units delivered once we plug in the Q2 numbers (here). Deliveries dropped just 5% in Q2 on a year-over-year comparison. The impressive item is how much they were able to reduce new vehicle inventory in Q2, down a whopping 32%. 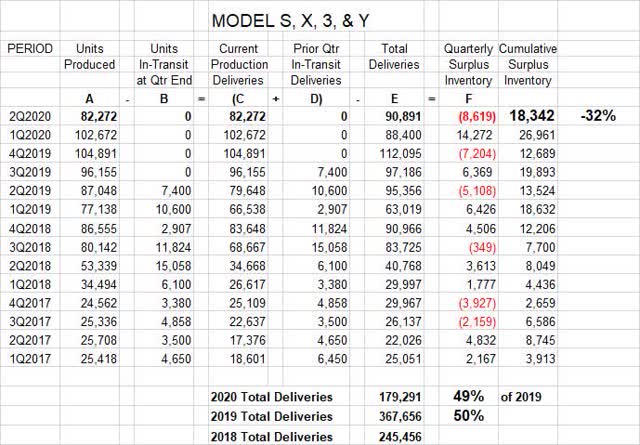 (Source: All charts by the author)

Despite Fremont being shut down for nearly a month during the quarter Tesla’s total deliveries in the first half of 2020 are just about half of their 2019 total. While commendable, Tesla really is going to have to pick up the pace in the second half of the year to hit its target of 500,000 deliveries. Tesla needs to average 160,355 deliveries per quarter in the second half. Continuing issues with COVID-19 still affecting all retail sales will likely make that a very difficult objective.

The biggest reduction occurred in the S and X inventory where unsold units were reduced an incredible 65%. While selling all of the leftover inventory from Q1, Tesla sold at least 1,098 2019 or older units too. The downside for S&X is that after a 33% decline in sales from 2018 to 2019, in the first half of 2020 Tesla has only delivered 34% of its 2019 volume. The bright side is unsold inventory is down to just 2,332 units which is the lowest level since 4Q16 when I began keeping records. The flip side of that coin is deliveries for S&X also were the lowest since I began tracking inventory in mid 2016. 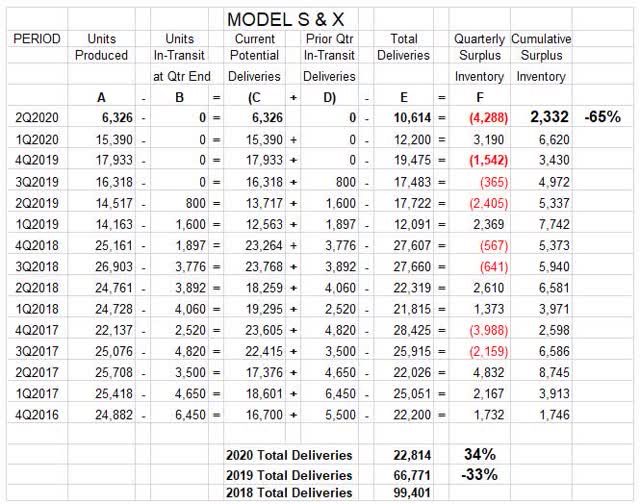 Model 3 and Y inventory numbers improved as well, but with the introduction of Model Y deliveries in Q1, it’s still impossible to see a new pattern yet. Tesla normally breaks out a new model separately but has chosen not to do so with the Model Y which makes a review of both Model 3 and Y muddy. Everyone has an opinion as to why Tesla is not separating the numbers, but I will just review the data for now. 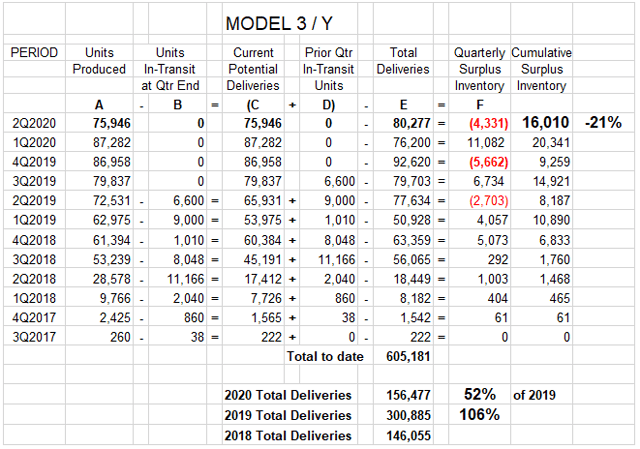 Tesla was able to bring this inventory group back below 20,000 and down to 16,010 for a 21% reduction in the quarter. While deliveries in the first half stood at 52% of the 2019 total we again cannot see much impact from the introduction of the Model Y. Overall deliveries rose just under 4,000 units QoQ but accounted for a little more than a third of the unsold units accumulated during Q1. Whether Tesla was able to clear out any of the 9,259 unsold Model 3s left over at the end of 2019 cannot be determined from Tesla’s published information.

With Chinese and German production of Model Y not expected until 2021, it’s hard to see how Tesla could improve production by more than 50% over its best quarter to date (4Q19 with about 105,000 total units) using just existing factories in the second half. But that’s exactly what it would take to hit 500,000 deliveries at this point.

We can all see the huge growth in sales for Model 3 from its introduction to 4Q19 in the above chart. I find it very surprising Tesla would not want to break out and highlight the Model Y’s path of sales and production growth. But based on released data for Q1 and Q2 it’s hard to see any improvement from the Model Y introduction on deliveries. If that is indeed not the case, why not show the investor community? The claim in the Q1 release (here) that Model Y was profitable in its first quarter remains unproven and just “noise” when Tesla will not even release basic production and delivery data for the model.

With the new factory in Berlin slated to begin with Model Y production one has to ask what is Tesla seeing to warrant an entire EU factory focused on Model Y production? 2,000 Euro refundable pre-orders are certainly not enough to base the development of another factory. Likewise, the recently-announced factory outside Austin also is slated to start with Model Y production. At some point soon Tesla management needs to document the proven need for these new facilities beyond the hype. A rapidly-rising delivery chart for Model Y would be all the proof anyone would need to see.

In the Q2 release, Tesla also claimed to be installing equipment now in Fremont to boost production for Models 3 and Y from 400,000 to 500,000 units. Where are all of these sales going to come from? Shanghai, Austin, and Berlin also will have dedicated Model Y production. How many Model Y sales is Tesla projecting in 2021/2022?

Production of Models S&X continues to shrink, down to under 7,000 units in Q2. These models were successful in cementing the Tesla image and keeping revenues alive until the Model 3’s arrival. Sadly, they have since been shrinking in both sales and popularity with numerous production issues coming to light in the ensuing years. The question really becomes, how much longer will Tesla keep these lines alive? Could those lines at Fremont be better utilized producing other models?

The lowest-priced model in the lineup continues to forge ahead. Will Model Y steal some of its thunder? I thought so until it was announced last week that the lower-priced Model Y, single motor, RWD version will not be put into production. That was kind of a head scratcher for me. With a $12,000 price difference between the base Model 3 and Y it will be hard for many to justify that much money to get a hatchback and a little more headroom. The average buyer could care less about dual motors or all-wheel drive in many parts of the world. Most Tesla buyers also are not interested in drag racing their cars despite all of the fan sites glorifying the occasional race against a Corvette or exotic supercar.

It’s always easy to pick apart a quarterly update. But I pay special attention to the chart Tesla provides showing trailing 12-month data. If you look at the chart in the Q2 2020 Update (linked above) you will see two items we have never seen before. First, is a decline in vehicle deliveries. The second is a profit in net income.

The decline in deliveries was to be expected since the last three quarters of 2019 set new records and 2020 is nowhere near those numbers this year. The profit in net income also was expected due to the sharp rise in regulatory credit sales so far this year. Most of that increase is attributable to a deal Tesla made with Fiat-Chrysler. About $1.2 billion in EU CO2 credit sales is being paid to Tesla in 2020. While real, these sales are unlikely to be sustainable at these numbers (here). Fiat-Chrysler along with every other OEM selling vehicles in Europe is introducing a long line of new plug-in hybrids and battery electric vehicles in the next 12-18 months (here) that will greatly reduce or eliminate the need to buy outside credits.

I took a lot of good-hearted flack on my last article in June about my purchase of Nikola (NKLA) shares. As I told readers then, this was strictly a short-term play. I went in at about $38 the day of the ticker change and was stop-loss’d out at $57 a short time later. For those of you keeping track that was a 50% profit in less than a month. When you cannot monitor the market every minute of the trading day stop-loss orders are mandatory, in my opinion. I was correct in my opinion that the hype would cool on NKLA and the price would peak and then fall back.

I did exactly the same thing this month with TSLA. Yes, that’s right folks, TSLA. I got in earlier this month on July 2 at around $1,200 the day they announced Q2 deliveries and was knocked out at $1,615 11 days later. Both of these stocks are way too volatile to consider holding long term in my portfolio. I know many readers have done very well holding TSLA and congrats to them.

But in my personal opinion, TSLA could shift direction in amounts greater than 10% of the share price on any given day where it’s today, up around $1,500. Ending up on the wrong side of that swing could be very painful and I avoid stock market pain whenever possible. Unless Q3 ends up being a huge turnaround in production and deliveries from Q1 and Q2 we could easily see this stock slide back to the $1,000 range or lower by year end. Again this is my personal opinion and in no way is meant as trading advice. As always, I look forward to your questions and comments.